The Heron's Cry by Ann Cleeves: A review 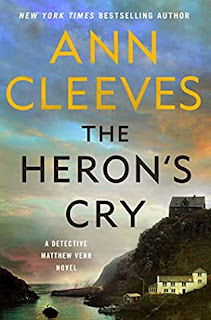 I wonder if Ann Cleeves is planning to name all of her books in the new series featuring detective Matthew Venn with a reference to birds. The first book was The Long Call, a reference to the call of the Herring Gull, and now we have The Heron's Cry. It must be admitted, however, that the herons who feature in the story are all standing like statues in typical heron pose waiting for a fish to come within reach of their bill. Herons do, of course, have a voice, more of a croak than a cry, and usually given just as they are taking flight. But I digress.
Detective Sergeant Jen Rafferty enjoys a party and she attends one given by a friend at which she meets retired physician Nigel Yeo. Dr. Yeo is now the director of a local patient advocacy group called North Devon Patients Together. In that capacity, he is currently looking into the suicide death of a young man. The patient suffered from paranoia and his family believes that he was negligently released from a psychiatric facility. Dr. Yeo had specifically requested to be invited to this party because he wanted to talk to Jen, apparently in regard to his investigation. Unfortunately, by the time he meets her, she is quite drunk and unable to coherently deal with the doctor's concerns and so they agree to meet the next day. But the next morning, Yeo's daughter Eva Yeo who is a glassblower finds her father's body in her studio with a shard from one of her handmade vases stuck in his neck.
Matthew Venn is assigned to the case and he calls his second in command, Jen, to join him even though it is her day off. She arrives and is appalled to find that the victim is the man she had met the night before. She immediately fears that the subject he had wanted to discuss with her may have been the motive for his murder. Matthew's suspicion falls on the daughter, but when a second person, a neighbor of Eve's is murdered in the same way, with a glass shard from one of her creations, he reconsiders his suspicions.
His suspicion of Eve causes conflict at home. She is a friend of his husband Jonathan and he is quite sure that she is innocent and he wants to invite her to stay at their house so he can take care of her, an idea which Matthew, of course, nixes. Also, the second person who was murdered had a connection to Jonathan through the community center at which he is the director. The man taught craft classes there, but unlike nearly everyone else questioned, Jonathan disliked him. He felt he was a phony and a user. So far everyone who has been murdered in this series is in some way connected to Jonathan's community center. Are we sure he isn't a serial killer? Okay, I'm being a bit facetious there, but again I wonder if this connection to Jonathan's work will be a continuing theme in the series.
DS Rafferty, meanwhile, is going about her duties in a professional manner, which is no less than we would expect from someone whom Matthew considers the best detective he's ever worked with. At length, the two are able to put all the pieces together and figure out what happened.
I really like the character Jen Rafferty. In fact, she is my favorite in this series so far. A divorced mom of two teenage kids and a survivor of abuse by her former husband, she has a lot going on in her life, but she deals with it and just gets on with the job at hand. On the other hand, I have some problems with Matthew. His personality is very inflexible and sometimes seems to get in the way of his investigation. His problematic personality seems to overshadow the narrative. Cleeves' plotting, as usual, is intricate and impeccable. She gives us complex characters among the cast of victims and potential perpetrators. But the plot did seem a bit derivative of the first book. In fact, I have a hard time separating the two in my mind. Overall, I was just the tiniest bit disappointed in this one, but I'll be generous and keep the rating at four stars.
My rating: 4 of 5 stars
Ann Cleeves books reading reviews