Call for the Dead by John le Carré: A review 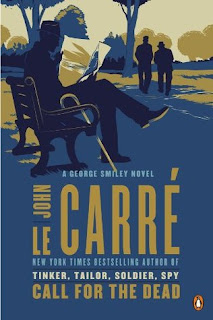 I had planned to reread some of John le Carré's books this year even before his recent death, but his passing clinched it for me. I decided to start with this one, which is the first in his George Smiley series. As I got into reading it, I realized I had not actually read this particular book before. No matter.

Le Carré meticulously describes George Smiley. He is short, somewhat fat, wears glasses, is past middle age, in fact, close to retirement. He is the absolute living embodiment of the anonymous man. You would never give him a second look.

He is (was) married to the beautiful Lady Ann Seacomb, and he can never quite figure out how that happened. Why would such a woman be interested in him? But Ann has never been faithful to him, and when we meet George, she has abandoned him and gone off with a Spanish race-car driver.

George is a member of England's foreign service. He is a spy, but his job currently is mostly pushing papers.

An anonymous letter had been received at the Foreign Office alleging that an employee named Samuel Fennan had been a member of the communist party as a student before the war. This is during the 1950s when the "red scare" is going strong. George is assigned to investigate Fennan. He interviews him and is convinced there is no there there, and he assures Fennan that the investigation is over and the file on him will be closed. He is shocked when he learns the next day that Fennan is dead of apparent suicide with a note by his body that says his career is finished and he can't go on. George suspects all is not as it seems and determines to look into the death.

From this point, the narrative becomes something of a murder mystery, because, of course, the suicide was not a suicide. George doggedly pursues the truth, even after he is attacked and nearly killed. We also meet George's colleagues, Inspector Mendel, Peter Guillam, and his boss Maston, as well as some old acquaintances that keep turning up. The case that George and his colleagues investigate turns out to be more complicated than first appeared on the surface. There's an international espionage ring to contend with.

George Smiley is pretty much the opposite of James Bond. Bond is all action and not much intellect; George is all cerebral and hardly any action. Fans of the Bond series might not be entertained by this. But in fact, the George Smiley character is probably a lot closer to the reality of what it is to be a spy.

This was le Carré's first novel, published in 1961, and it is not as polished as his later work. The plot is relatively uncomplicated, but the characters are well-described and one can easily visualize them. It was a promising start for a new writer and I look forward to following his career in the later books in the series.