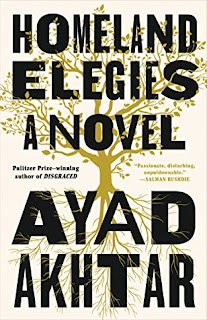 This book had not been on my radar at all until I read President Barack Obama's annual list of the best books of the year. This title appeared as one of his favorites. That was a sufficient recommendation for me and I put it on my list. As I started reading it though I found myself very confused. I had understood that it was a novel and yet it read exactly like an autobiography/memoir. Had I been mistaken? But there it is right on the cover - "a novel." I looked at Goodreads and discovered that I was not alone in my confusion. A number of other readers had thought they were reading a memoir.

The book, in fact, reads like a series of personal essays. The essays illustrate different aspects of the narrator's personality and background, a background many parts of which he shares with the author. Both are American-born writers, playwrights who have won a Pulitzer Prize. Both identify as part of the Muslim world and culture, even though neither is devoutly religious.

The narrator who had labored in relative obscurity, always on the edge of penury, had suddenly become a part of the cultural elite upon winning the Pulitzer Prize, and just as suddenly he is presented with extraordinary financial and sexual opportunities. He is swept off his feet by all these opportunities and eager to partake in the fullest, as he rubs elbows with celebrities and billionaires. He is made rich himself by a sudden windfall from a shady investment, which only increases his access to the sexual buffet. Consuming from that buffet ultimately gave him a case of syphilis.

But before all that, the narrator is the child of Pakistani immigrants and his view of America was formed by his childhood in Milwaukee and by his liberal arts education. His father, who is one of the most interestingly drawn characters in the novel, is almost jingoistic in his Americanism. He is a famous cardiologist and in the 1980s he is called in to treat a New York billionaire named Donald Trump. Trump charms the doctor and involves him in some of his real estate deals. He gets The Art of the Deal and keeps it in his living room, but like many blinded by its author's fame, he loses money on those real estate deals. His family's fortunes fall but even so, years later, when Trump runs for president, the cardiologist is a rabidly devoted supporter. After Trump becomes president, it is only slowly and with reluctance his former cardiologist admits what he is and disowns his support of him.

By 9/11/01, the narrator is living in New York and experiences the attack on the city in a personal way. Like thousands of others, he queues up to give blood as a way of showing his support. As he waits in line, he is unmercifully harassed by an Islamophobic man and to his utter shame, he wets himself in terror. Afterward, in order to protect himself from further attacks, he steals a crucifix pendant at a Salvation Army store and he wears it for several months. Years later when he confesses that to his Pakistani-American girlfriend, she is shocked. She could never wear a cross, she says. Instead, her family bought flags.

In 2008, the narrator and his father travel to Abbottabad in Pakistan to visit relatives. At the home of his uncle, the uncle lectures him about the "tactical genius" of the 9/11 attacks. He speaks of a Muslim philosophy that is based on the principles espoused by the Prophet Muhammad. It is one that integrates its military and political aspirations. The narrator disagrees with his uncle, but as a guest in his home, he finds it prudent to hold his tongue. His father is appalled by his brother's view and afterward, he harangues his son about how different and, in his words, how terrible the son's life would have been if his father had not emigrated to America. It is, of course, in that same Abbottabad three years later that Osama bin Laden was killed by American Special Forces.

It is almost impossible for me to sum up this book in any meaningful or coherent way. It is a series of anecdotes that, in the end, create a vision for us of what it is like to grow up Muslim, to live as Muslim in America, especially in post 9/11 America. The wound inflicted on the Muslim community by that event has been deep and long-lasting. These are people for whom America was their home and who only aspired to be good citizens and live in peace. Suddenly their lives were thrown into turmoil and their dreams of belonging were tarnished in some cases for good.

As I finished reading the book, the confusion that I had felt at the beginning had dissolved. I could not imagine the story having been told in any other way. It is a very moving narrative and offers us a clear-eyed view of the stressful contradictions that are a part of American Muslim life. I came away from it with, I think, a much better appreciation of the pressures and anxieties endemic to those lives. Thank you, Ayad Akhtar.