The King at the Edge of the World by Arthur Phillips: A review 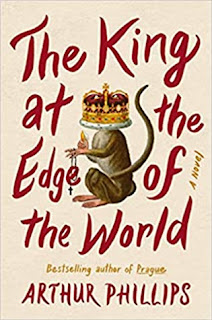 In 1591, Mahmoud Ezzedine is content in his role as the trusted doctor to the sultan of the Ottoman Empire. He has a wife whom he loves and a young son whom he adores and a profession that gives him satisfaction. He would happily spend the rest of his years in this life, but then he is jolted out of his existence.

The sultan receives a letter from Queen Elizabeth of England requesting his help in the religious conflicts - Protestant vs. Catholic - of the day. The sultan decides to send a diplomatic mission to England to assess the situation. It is rumored that Elizabeth is ill and may die. It is determined that the sultan's doctor should be a part of the mission. Much as he might wish to, there is no way that Ezzedine can refuse the assignment.

Ezzedine finds England dirty and underdeveloped as compared to the advanced Islamic society. His one pleasure in the country is getting to know and becoming friends with an English doctor with whom he shares his knowledge about various herbs as treatment for disease.

Eventually, the main body of the diplomatic mission returns home, an event to which Ezzedine had eagerly looked forward, but at the last minute, he is left behind. Even though he is nominally a free man, he finds himself being passed around like a gift from one "master" to another.

Years pass and Elizabeth's condition only worsens. She is old, ill, and childless. It is almost treason to dare to think that she might die and yet what will become of England if she does die? There is no clear heir to the throne.

The most likely heir is King James VI of Scotland, but there is a problem with that. Protestantism is ascendant in England since Henry VIII and although James professes to be Protestant, there is some suspicion that the claim is not sincere. His mother and his family historically were Catholic. He represents a break with that tradition - if indeed he is Protestant.

One of Elizabeth's spymasters, Geoffrey Belloc, a veteran of the religious wars, devises a plan for sussing out the truth of James' convictions. To achieve his purpose, he enlists Mahmoud Ezzedine, and once again Mahmoud has a new master. And that's how he ends up in cold, wet, primitive Scotland with the king at the edge of the world. If he succeeds in his task, he is promised he can go home again. He will do just about anything to be able to go home to his wife and son.

I found this book to be quite a treat to read. It is character-driven historical fiction at its best. The character of Mahmoud reveals a deeply humane and complex man and the narrative is engaging and intelligent. The book wrestles with questions of faith and identity. Why, for example, would people who all claim to be Christian, be willing to kill each other over different interpretations of a text? It is a mystery still after more than four hundred years. And, of course, such deadly religious conflicts continue in many parts of the world today.

My only real problem with the book is the ending. The reader hopes for, if not necessarily a "happily ever after," at least a positive resolution to Mahmoud Ezzedine's situation. But the ending is utterly ambiguous and unsatisfactory in my view. Other than that, it was a great read.