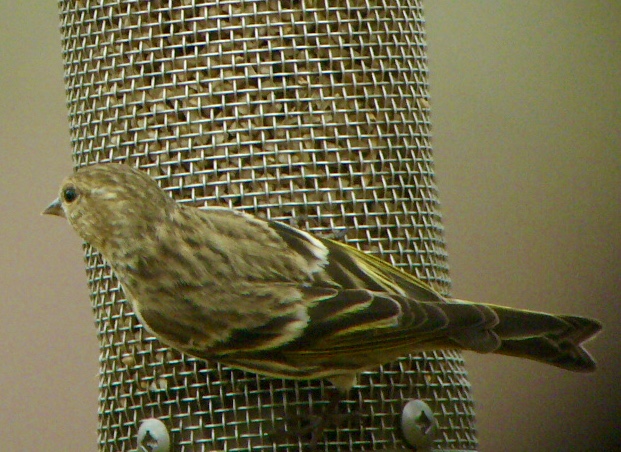 ...and the Pine Siskins finally showed up at my feeders this week. They are always welcome guests.

The Revelator online conservation magazine featured a roundup of some of their top stories of 2020. Among them were these:

*~*~*~*
Two bird bloggers, 10,000 Birds and Avian Ecologist, listed their best birds of 2020.
*~*~*~*
The current administration in Washington is still doing its damnedest to guarantee the despoiling of the Arctic National Wildlife Refuge on its way out the door, but so far they've had no interest from oil and gas companies. In fact, the state of Alaska seems to be the only interested bidder. Nineteen days and counting...
*~*~*~*
Here are the wildest animal stories of 2020 according to the New York Times.
*~*~*~*
In still more efforts at despoiling Nature, the current administration is planning to grant mining and energy firms access to public lands over the determined opposition of environmental groups and tribal communities. Some of the lands they are trying to give away in Arizona are sacred to Native American groups there.
*~*~*~*
The Greater Sage-grouse is a threatened species in California, but controlling the invasive grasses that have overrun some of the bird's former habitat there could help it survive and offer the population a chance to rebound.
*~*~*~*
Illegal deforestation is still a persistent problem in South America, especially in the territory of indigenous groups.
*~*~*~*
The braininess of the octopus is well-documented, but its cousin, the cuttlefish is no slacker either. Researchers who study the cephalopods have discovered surprising talents in cuttlefish over the years, including an ability to plan ahead.
*~*~*~*
Much has been written about the respite provided to Nature by the pandemic in 2020. Humans were less visible in many areas in the natural world and that provided an opportunity for many animals to become more visible. This has provided emphasis to a dichotomy: People need access to Nature but human impact jeopardizes what Nature we have. A case in point is the Capercaillie. 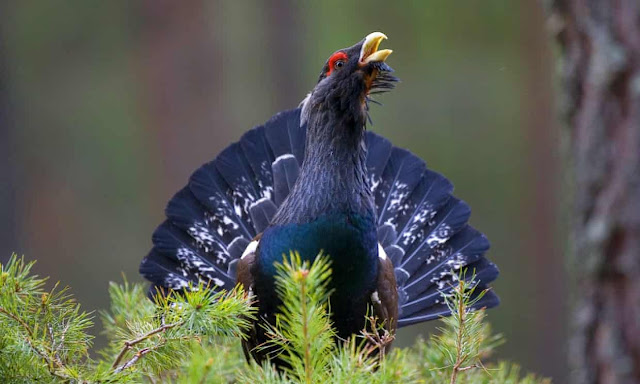 Image from The Guardian.

The iconic Scottish bird was once plentiful but now faces extinction, largely because it simply cannot tolerate human disturbance.
*~*~*~*
A decade ago, scientists were concerned that the African lion could go extinct in Kenya, but the population of the animals is now thriving there and it's all because they have gained some remarkable protectors. The Maasai who formerly hunted lions now guard them.
*~*~*~*
A previously unknown, discrete population of blue whales, the largest creature to have ever lived on Earth, has been located in the Indian Ocean. The whales sing a distinct song, different from any other known group.
*~*~*~*
Mongabay, the online Nature news service, gives us its list of the 15 top species discoveries of 2020. Among them is this cute (and endangered) lemur langur. 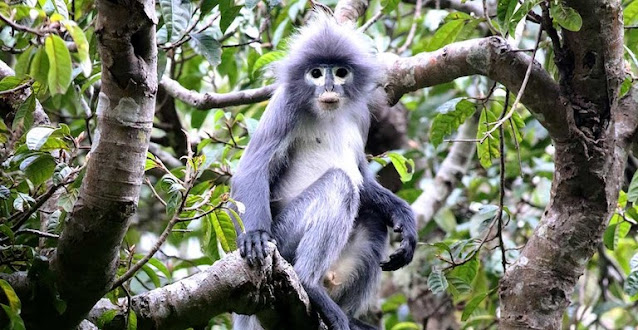 *~*~*~*
New international rules are designed to stop richer nations from dumping their contaminated plastic waste onto poorer nations. According to a UN agency, it could result in cleaner oceans within five years.
*~*~*~*
The current administration has done its best to sabotage America's top climate report, but they have largely failed because it turns out those climate scientists can be quite sneaky! And persistent.
*~*~*~*
Global warming has resulted in the ongoing melting of the Siberian permafrost and that has revealed some ancient treasures, most recently a well-preserved ice age woolly rhino calf.
*~*~*~*
The removal of four dams on the Klamath River will be the largest dam removal project in American history and it will free up 400 stream-miles of restored habitat for salmon and other migratory species. This action has been long sought by the Yurok Tribe whose livelihood depends on the fish.
*~*~*~*
In another year-end roundup, the Scientific American lists the top five climate stories of 2020.
*~*~*~*
Charlie Pierce's beat is politics and he covers it with a combination of cynicism, righteous anger, and dark humor, but at the end of 2020, he digressed into the world of Nature and gave us some of the things that were not necessarily awful about the year and he ends with a dollop of hope for the future.
weekly roundup