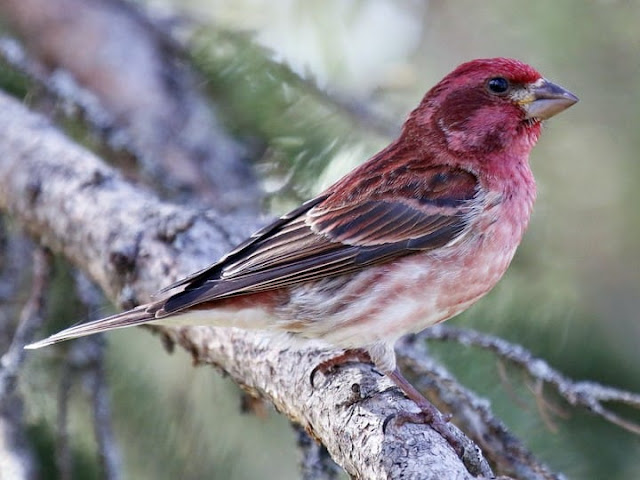 At the window of my office, I trained my binoculars on the bird feeder in my front yard and noted to myself, Pine Siskins, Pine Warbler, House Fin... Wait a minute! That finch isn't red, it's purple. Purple head, purple chest, purple wash on the wings - it's a Purple Finch! And of course, my camera was nowhere nearby so I couldn't get a picture. And then it was gone. In the thirty-two years that we have lived here, I can count on the fingers of one hand the number of times I have seen a Purple Finch in my yard so Friday was definitely a red-letter day for me. Or a purple-letter day.

By now, we must be fully aware that the current evil administration in Washington will do everything it possibly can to trash the environment on the way out the door. Those efforts continued this week, even as the president was also busily inciting insurrection and invasion of the Capitol Building and the attempted overthrow of the government. Eleven days and counting. Or maybe less.

The cost of US climate disasters doubled in 2020, reflecting the increased damage being caused by climate change. Hurricanes, wildfires, and other disasters caused $95 billion in damage according to the latest data.

A new study has found that there is already enough carbon in the atmosphere to cause the planet to exceed the international agreed-upon limits to control climate change. But all is not necessarily lost. The change could be delayed for centuries if the world quickly stops emitting more greenhouse gases.

Hundreds of birders have flocked to the Washington, D.C. area to view an unexpected and unusual visitor. 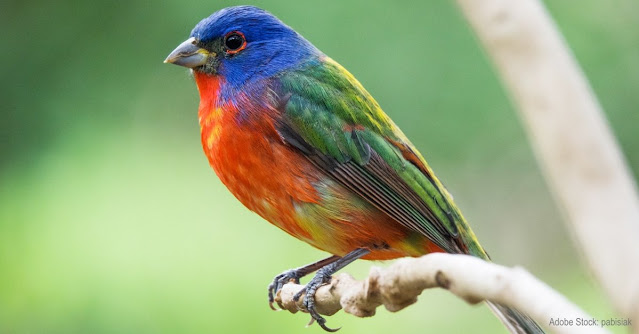 This Painted Bunting, normally found much farther south, has been visiting the Chesapeake and Ohio Canal National Historical Park, found on a bend of the Potomac River, a short journey north-west of Washington in Maryland. Needless to say, birders in the area are thrilled.
*~*~*~*
Dozens of species, including frogs, fish, orchids, and other species were likely lost in 2020 due to our damaging effect on ecosystems throughout the planet.
*~*~*~*
The invasive Asian carp is a threat to fish that are native to the Great Lakes. Michigan, Illinois, and the Army Corps of Engineers have agreed to work together on a project on a dam and lock near Joliet that is intended to stop any of the approaching carp in the river there and prevent them from entering the lake.
*~*~*~*
Tougher building standards to address the effects of rising waters due to climate change could increase flood insurance rates and that will be one of the challenges faced by the new administration as it seeks to fulfill its pledge to help communities prepare for these effects.
*~*~*~*
Of course, one of the biggest problems facing our planet today is the disposal of plastic. This writer says that manufacturers must be held accountable for their products in order for us to control the problem.
*~*~*~*
The current administration gutted protections for migratory birds on Tuesday, delivering a parting gift to the oil and gas industry, which has long sought to be shielded from liability for killing birds unintentionally in oil spills, toxic waste ponds, and other environmental disasters. If this had been in effect at the time of the Deepwater Horizon oil spill disaster in the Gulf there would have been no penalty to BP.  It is hoped that this entire action can be reversed, along with a lot of other last-minute regulatory changes, by the new administration.
*~*~*~*
Sockeye salmon have hit a record low in Lake Washington and are in danger of becoming extinct in that lake in Seattle.
*~*~*~*
The black-footed ferret is an endangered species, a relative of the mink. Some minks in the wild have been found to have COVID-19 which presents a further danger to the ferret. Now an experimental vaccine is being administered to the ferrets to try to protect them from the virus.
*~*~*~*
The Environmental Protection Agency under the present administration has finalized a rule to limit what research it can use to craft public health protections, a move opponents argue is aimed at crippling the agency’s ability to more aggressively regulate the nation’s air and water. This is yet another last-minute change that the Biden administration is going to have to try to reverse.
*~*~*~*
Last year, 593 manatees were found dead in Florida. Of those, an estimated 90 died after boat strikes, according to preliminary data from the Florida Fish and Wildlife Conservation Commission, but that number could be higher because many of the deaths were not thoroughly investigated due to restrictions caused by the pandemic.
*~*~*~*
New satellite data shows the long decline of Arctic sea ice.
*~*~*~*
A new study has revealed that roughly one in three of large American rivers has changed color since 1984 and scientists say this could be very bad news for human health as well as the other critters that depend on these rivers.
*~*~*~*
A study of the diet of Eurasian Eagle Owls has revealed a previously overlooked rare bush cricket species in southeastern Bulgaria.
*~*~*~*
Massachusetts is planning to end the sale of new gas-powered vehicles by 2035. In order to meet its goal of net-zero carbon emissions, fossil fuel use by vehicles must be all but completely eliminated by 2050.
*~*~*~*
In Chicago, endangered Piping Plovers have chosen a sliver of Montrose Beach for their yearly nesting ground. Conservationists are asking that this be protected by adding it to a nearby dunes natural area.