The Everlasting by Katy Simpson Smith: A review 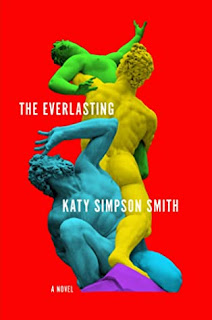 What does it mean to be "everlasting"? I am reminded of the old Arab proverb about the pyramids: "Man fears time, but time fears the pyramids." The city of Rome may not be everlasting on quite the same par as the pyramids, but it was founded in 753 BCE and thus is almost three thousand years old. It comes by its title of "the eternal city" honestly.

Those 3,000 years of history are well-documented and provide a trove of subjects for writers to elaborate upon and from Shakespeare to the present, they've never been shy about doing it. Now comes a writer of historical fiction named Katy Simpson Smith, who I frankly had not heard of before, to give us a view of 2,000 years of that history. To do that she has employed a clever hook on which to hang her story. It is, in fact, a literal hook - a fishhook discovered in an archeological dig in 2015. Carbon dating showed it to have been forged around 130 CE. Smith takes us on the journey that this particular artifact has made through the centuries.

She begins with Tom, a biologist studying the smallest of creatures. He is involved in that archeological dig, and he is suffering from the early signs of multiple sclerosis and is about to go through a divorce.

Next, we head back to 1559 and meet Giulia de' Medici, a princess of Moorish descent, a widow who has recently embarked upon her second marriage. But she enters that marriage with a secret; she is pregnant and not by her new husband but by a secret lover. On the one hand, she wishes to rid herself of this inconvenience; on the other, she wonders about passing the child off as her husband's.

On to the ninth century, 896-897, where we meet Felix, a monk charged with keeping the monastery's crypt. He sits in a catacomb with his decomposing brothers who are seated on stone toilets through which their bodily liquids slowly drip. As he watches the most recently dead, his close friend, begin to decompose, he remembers a beautiful young man named Tomaso who he loved in his youth.

And finally, back to 165 CE and a twelve-year-old girl named Prisca. Prisca's father becomes involved in a new religious sect called Christianity. Prisca sits in the shadows when her father attends meetings and she absorbs the message of the dogma. She becomes inflexible and unquestioning, as only a teenager might, in accepting the truth of this sect as she understands it and that eventually leads to her martyrdom by the Rome of Marcus Aurelius.

Smith presents her stories in a series of eight chapters, two devoted to each character. The stories, at their heart, are about the love and faith of her characters, many kinds of love from adulterous and forbidden to religious and many kinds of faith, in oneself, a higher power, and one's fellow man. It's an ambitious scaffolding for a historical novel and I wanted to like it more than I did, but I found the writing a bit pedantic and occasionally full of itself and I didn't feel a real connection with any of the characters. The writer gets points for imagination and creativity and a considerable amount of research but I do wish the execution could have been more inspired.