Piranesi by Susanna Clarke: A review 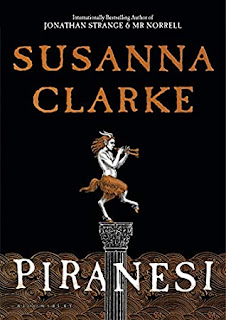 I had no idea what I was getting into when I started reading this book. Even a third of the way through, I still wasn't sure. A labyrinthine world of endless halls filled with statues and inhabited by two living humans and thirteen dead bodies? Is this The World or is it a construct of a greater world that exists outside the labyrinth? And if it is only a piece of a greater world, who built it and why? And where is that "greater world"? Our narrator does not know the answers to these questions. He remembers nothing before the labyrinth, not even his own name. The second human in the labyrinth, referred to as the Other, calls him Piranesi, but he does not believe that is his true name.
Piranesi is perfectly happy and content in his labyrinthine House. He sees the House as an entirely good entity that provides him with everything he needs to survive. There is one problem which Piranesi must face in regard to the House: Its lower levels are periodically flooded by tides from the sea. When several tides converge at once, they can be life-threatening. Piranesi studies the tides and charts their courses so that he knows when to expect them. He thinks of himself as a scientist and an explorer who spends his waking hours describing his observations of this world in a meticulous journal. He tells us, "As a scientist and an explorer I have a duty to bear witness to the Splendours of the World. The Beautiful Orderliness of the House is what gives us Life." He records facts about the size, position, and subject of each statue. He searches for patterns in the flight of birds or in the statues' placement. His studies and observations eventually lead him to a kind of revelation:

"The search for the Knowledge has encouraged us to think of the House as if it were a sort of riddle to be unraveled, a text to be interpreted, and that if ever we discover the Knowledge, then it will be as if the Value has been wrested from the House and all that remains will be mere scenery. The sight of the One-Hundred-and Ninety-Second Western Hall in the Moonlight made me see how ridiculous that is. The House is valuable because it is the House. It is enough in and of Itself. It is not the means to an end."

Susanna Clarke conjures this surreal House with hypnotic prose and even though I'm confused, I have to keep reading. This is a suspenseful mystery that one feels compelled to solve. Piranesi is a prisoner and yet he has obviously cheerfully accepted his imprisonment. He accepts the world as he sees it and makes no effort to change it. He meets the Other on regular occasions to report on his findings. He considers the Other his friend. But is he? That is part of the mystery we must solve.
As I progressed through this novel, I began to see parallels between Piranesi's situation and my own. Having spent much of the last nine months being more or less housebound because of the pandemic, I have thought of my own House and Garden as a benevolent place that provides for my needs and helps keep me safe. (Of course, there is a whole unseen army of essential workers out there in the world who are actually providing for my needs and making my life possible: UPS and FedEx delivery people; the U.S. Post Office; grocery store clerks who assemble my food order for me and deliver it to me curbside; restaurants who deliver food when I'm tired of eating my own cooking; a cleaning lady who comes regularly to help keep my house in order and her husband who keeps our yard from becoming an overgrown jungle; daughters who ceaselessly and uncomplainingly run errands for me; I could go on...) I began to suspect that there was more to Piranesi's benevolent House than perhaps he was aware of.
Throughout the book, I kept puzzling over what genre I should assign it to. Post-apocalyptic science fiction? Fantasy? Psychological thriller? I came to the conclusion that it was all of the above. Most of all, it is a novel that perfectly captures the isolation of this moment. Its final resolution makes clear that none of these categories really matters. Piranesi's voice resonates because he speaks from a place that has become familiar to us and that is enough.
My rating: 5 of 5 stars
books reading reviews Susanna Clarke