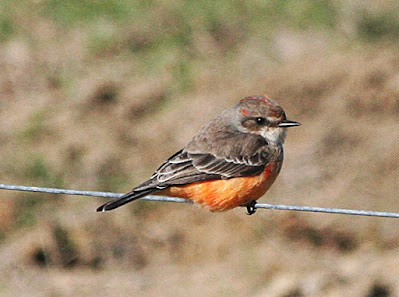 Vermillion Flycatcher photographed at Anahuac National Wildlife Refuge on the Texas coast.
*~*~*~*
One really has to feel for the new Biden administration. What a mess they are being left with and where do they even start to clean it up? The transition team says the damage to the government's ability to address climate change has been even greater than they realized and now they will be starting from scratch to reverse all that in order to meet the administration's goals.
*~*~*~*
2020 was effectively tied with 2016 for the hottest year on record. The New York Times has a global map that illustrates where the hottest of the hot spots on Earth were.
*~*~*~*
Even so, greenhouse emissions from the U.S. actually decreased by about ten percent last year. This is almost entirely due to the effects of the pandemic, but if it could be sustained it would help the country achieve its goal for reducing emissions.
*~*~*~*
The current administration may have just sounded the final death knell for the endangered Northern Spotted Owl in the northwest. They have opened up three million acres of the bird's protected habitat for logging. Many wildlife biologists fear the species cannot survive this action. Can the action be reversed? It is one more challenge for the Biden administration.
*~*~*~*
One of the really positive effects of the pandemic has been that interest in birding and similar outdoor activities has increased. How wonderful it would be if this interest could be sustained and grown.
*~*~*~*
Officials at the San Diego Zoo Safari Park have announced that several of the gorillas there have tested positive for the coronavirus, becoming the first apes in the nation known to have become infected. Apparently, the gorillas are experiencing relatively minor symptoms.
*~*~*~*
2021 might just be the year when offshore wind power finally begins to live up to its promise.
*~*~*~*
A small group of King Penguins has colonized Martillo Island off the coast of Argentina, nesting grounds of Gentoo and Magellanic Penguins. It is uncertain whether the colony will be able to sustain itself.
*~*~*~*
We know that insects are in trouble. Their numbers are declining drastically all over the planet. If we don't do something to save them, our species could soon be in serious trouble as well. The National Academy of Sciences has eight suggestions of how individuals can help the insects, ultimately helping themselves.
*~*~*~*
An ambitious new tracking system will allow scientists to track scores of different species of animals from space. The resulting data should shed important light on the mysteries of animals' movements.
*~*~*~*
There are glaring inequities in our system of energy production and switching to renewables will not necessarily change that. It is important to consider "energy justice" as the first order of business as plans for the transition to renewables are made.
*~*~*~*
It has been quite cold here recently and the birds have been hungry. Led by the finches - American Goldfinches, Pine Siskins, Purple Finches, as well as the usual House Finches - activity at my feeders has been constant. It has been a challenge to keep them filled. As greater numbers of birds congregate at feeders in the winter, it is important to keep those feeders clean in order to guard against the transmission of salmonella. Pine Siskins, in particular, seem to be especially susceptible to the disease. 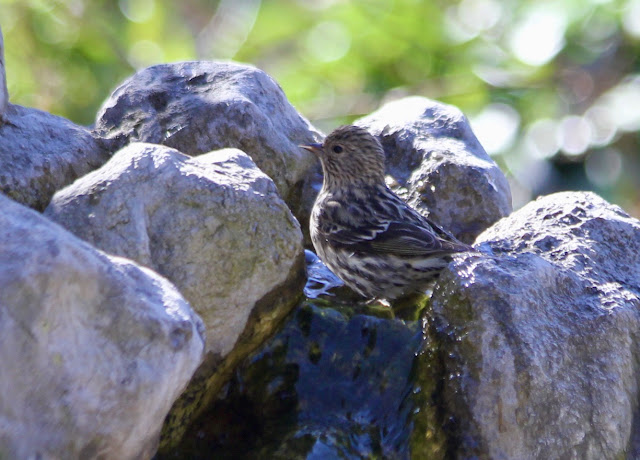 Cleanliness is next to godliness for birds. Got to keep those feathers clean even when the temperatures are in the 30s. This Pine Siskin is having a bath in my little fountain.
*~*~*~*
Emus do not seem to be at great risk from climate change. Emu populations are projected to continue to be fairly stable even with the effects of climate change; however, the greater threat to them is urbanization and losses from feral predators.
*~*~*~*
Dredged sand from the New Jersey Intracoastal Waterway is being used to help restore saltmarsh habitats where the threatened Saltmarsh Sparrow nests. These areas are subject to increased flooding because of the rise in sea level. Using the sand to help raise the saltmarshes just a bit higher should help to prevent some of that flooding.
*~*~*~*
Finally, there is some good news about the status of a midwestern bird, the Interior Least Tern.  Thirty-five years of legal protection and habitat restoration have brought the bird back from the brink of extinction. The species has now recovered sufficiently to be removed from the Endangered Species List.
weekly roundup