The Lying Life of Adults by Elena Ferrante: A review 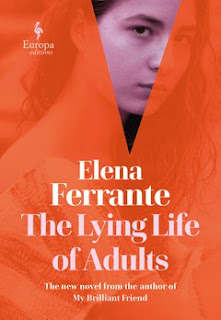 Twelve-year-old Giovanna is going through puberty and she is not having an easy time of it. She has always had a good relationship with her parents, especially her father who has always assured her that she is beautiful and brilliant. She believed him and her self-image and ego were healthy and strong. Then one night she overhears a conversation between her parents in which her father compares Giovanna to his long-estranged and thoroughly loathed sister, Vittoria. Vittoria's name has long been shorthand in their family for everything ugly and evil. Giovanna understands her father to be saying that she is ugly. She is completely devastated. In short order, she loses her moorings. She becomes moody and obstreperous with her parents and her school work begins to suffer.

Her parents come to understand that she must have overheard and perhaps misinterpreted their talk and they attempt to repair the damage, but she is unresponsive. She has become obsessed with her Aunt Vittoria whom she does not know. She demands to be able to meet her aunt and her father reluctantly arranges it. She meets and befriends the aunt and finds her strangely compelling and even attractive.  She begins to identify with the aunt and wants to visit her more and more often. At the same time, the aunt introduces her to other members of her extended family, cousins whom she had never met. She likes them all, but mostly what she likes is that her parents disapprove of them. Giovanna becomes a kind of double-agent. She reports on her aunt's activities to her parents and she reports on them to the aunt. What she reports is often embellished in the telling.

Meanwhile, the parents' marriage is falling apart. For years they have been close friends with another couple, parents of Giovanna's best friends. Now it turns out that all along her father has been in love with her friends' mother. Both couples separate and her father goes to live with the other woman. Giovanna's world is further shattered. She sees all the adults in her life as living lying lives and decides none of them can be trusted.

At about this time, she also becomes infatuated with a young man named Roberto. He is a charismatic personality and when he assures her that she is beautiful, her fragile self-image begins to be restored.

Ferrante's fiction is always focused on relationships between women. In her Neapolitan quartet, it was all about Lila and Lenu as they grew up together and their lives took their separate paths. Here, we have a broader range of Giovanna's relationships with her mother, her aunt, her childhood friends, and the new cousins she meets along the way. The women in her books go through many, often torturous or traumatic moments in their relationships, but generally, the writer gives them a grace note at the end. If they don't live happily ever after, at least they have the possibility of doing so.

This book seemed to me to be a bit more loosely plotted than Ferrante's early books that I've read. That's not necessarily a criticism; I liked the book quite a lot but there were a few strands of the story that were left dangling. Most likely that was intentional and the truth is, I enjoyed the book from beginning to end.