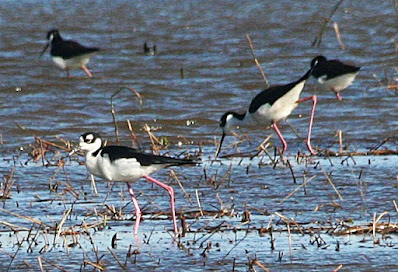 Black-necked Stilts foraging at Anahuac National Wildlife Refuge on the Texas coast.
*~*~*~*
President Biden has stopped the construction of the wall along the southern border, but it will take a major effort to remediate the cultural and environmental damage that was done by the construction carried out by the previous administration.
*~*~*~* 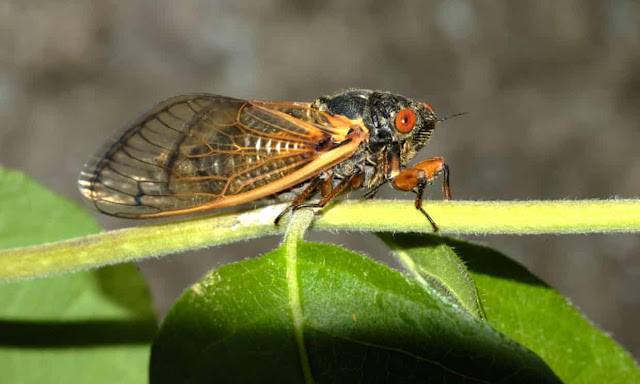 Billions of cicadas like this one have spent seventeen years underground and now they are set to emerge all across the eastern United States bringing swarming numbers and loud mating calls to major towns and cities.
*~*~*~*
Monarch butterfly populations in the west have declined by 97% since the 1980s and in the east, they are not much better off, down 80% in the last fifteen years. There are ways we can help, one of which is planting milkweed, their host plant, but research indicates there is a right and wrong way to do that.
*~*~*~*
"The Prairie Ecologist" has information to share about milkweed pollination.
*~*~*~* 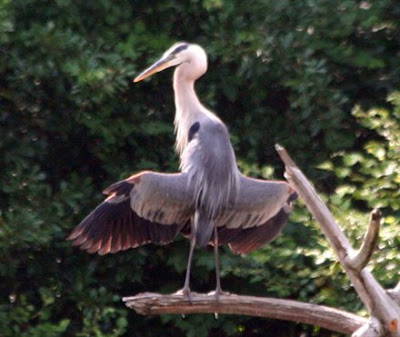 Great Blue Heron spreads its wings to enjoy a bit of sun.

In British Columbia, the Great Blue Herons are deliberately building their nests near the nests of Bald Eagles that are among their worst enemies. The reason? Even though the herons lose some chicks to the eagles, the eagles keep other predators away.
*~*~*~*
When and where were wolves first domesticated and started on their journey to becoming dogs? Some evidence suggests that it may have been in Siberia by the ancestors of Native Americans.
*~*~*~*
A new study that combines global ice loss from all sources reaffirms that it is on a pace to drive the worst-case scenario projected for sea-level rise.
*~*~*~*
Three years ago, the Florida Grasshopper Sparrow was thought to be on its last legs and near extinction, but today there is hope for the little bird. With the help of dedicated conservationists, it has made a remarkable comeback that many feared was impossible.
*~*~*~*
Unfortunately, the news is not that good for oceanic sharks and rays. They have declined by more than 70% since 1970. The main cause is overfishing and bycatch.
*~*~*~*
Tens of millions of migrating western birds depend on two areas as stopover sites according to new research. California's Central Valley and the Colorado River Delta are critical to the birds of the Pacific Flyway.
*~*~*~*
Federal officials, showing how rapidly the Biden administration is overhauling climate policy after years of denial under the previous administration, aim to free up as much as $10 billion at the Federal Emergency Management Agency to protect against climate disasters before they strike. The agency, best known for responding to hurricanes, floods, and wildfires, wants to spend the money to pre-emptively protect against damage by building seawalls, elevating or relocating flood-prone homes, and taking other steps as climate change intensifies storms and other natural disasters.
*~*~*~*
New rules protecting herring may also help to protect one of the birds that depend on them, Maine's favorite bird, the Atlantic Puffin.
*~*~*~*
The Fish and Wildlife Service is failing miserably in its duty to protect the habitat of the endangered Florida panther. The source of that failure appears to be politics. The agency appears to have been somewhat compromised by the lack of concern of the previous administration in Washington for the welfare of endangered species.
*~*~*~*
In regard to the attempted insurrection on January 6, we are learning more about the connection between the insurrectionists and climate deniers and other extremist groups such as an Oregon group called Timber Unity.
*~*~*~*
Harpy Eagles are one of the planet's most spectacular birds and also one of its most elusive. It generally avoids areas of human disturbance and it appears that its range is actually somewhat smaller than has previously been supposed.
*~*~*~*
One of the Executive Orders signed by President Biden mandates a review of how the previous administration reduced the size of Bears Ears and Grand Staircase-Escalante national monuments in Utah. It is almost certain that the monuments will be returned to their original size.
*~*~*~*
It seems that northern right whales may be experiencing a population explosion. At least fourteen new calves have been observed off the southeastern United States coast this season.
*~*~*~*
The world's rarest turtle may not be headed for extinction after all. A Swinhoe's softshell turtle discovered in Vietnam has now been confirmed to be female, offering hope that the species may be saved.