Jack by Marilynne Robinson: A review 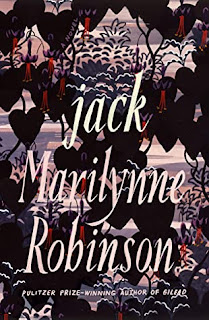 I had not read any of the books in Marilynn Robinson's acclaimed Gilead series prior to this one. In fact, I had never read anything by her. So I have no way of knowing if this is typical of her writing, but this novel just jumps right in, without any explanation or introduction, to a scene of a man and a woman walking on a street and having a philosophical/theological discussion. We don't know who these people are, where they are, or what time period they are living in. Moreover, once this first section finishes up, the narrative moves on to another scene of these same two unknown characters in a cemetery at night. It develops that the man, who is apparently a vagrant, had gone there to sleep, whereas the woman, for whatever reason, was visiting the cemetery when the guard locked the gate for the night and she was unable to get out. They meet up and they spend the night together wandering the cemetery and once again having their esoteric philosophical/theological discussion. Even after this quite long section we still don't know who they are. At this point, frankly, I was strongly tempted to throw the book across the room and move on to something else. I do not enjoy reading blind, not knowing who or what I am reading about. But, true to my code of finishing what I have started, I kept reading, and eventually, the narrative did circle back and reveal a bit about the identity of these philosophers.
The man is John Ames Boughton (Jack) and he is actually from Gilead, Iowa. He is the prodigal son of Gilead's Presbyterian minister. He has been in trouble of one kind or another since his teen years. He is a liar and a thief and has spent some time in prison, ironically for a theft that he did not commit. He has cut off any connection with his loving family, but his brother, Teddy, learned where he was and he sends him money occasionally. It's what helps Jack keep body and soul together. He is now in St. Louis and that's where all of the philosophical talks have taken place. Jack is White.
The woman is Della Miles. Her father also is a minister in Memphis where she is from. In fact, he is a bishop of the A.M.E church there. Della is Black. She is a teacher at a high school. Her family is extremely proud of that fact. Teaching is an honorable and honored profession in her community. She is close with her family and members of the family sometimes come to visit (and check on) her.
The inevitable happens. These two people with so much in common in their backgrounds and with a mutual love of philosophical questions and poetry fall in love. They are occasionally able to spend time together at Jack's bare apartment or at Della's comfortable one when her roommate is out - the roommate who seriously disapproves of this relationship. We are never explicitly told what the time frame is but we can deduce that it is sometime after World War II and before the Supreme Court decision in the Loving vs. Virginia case in 1967 because miscegenation laws are still in force and are still enforced. Jack lives in terror that they will be arrested and tried, especially that Della will be arrested and tried because the law would deal most harshly with her.
Della's roommate lets her family know about her new relationship and members of the family come to visit her and attempt to dissuade her from continuing to meet Jack. First, her Aunt Delia and then her sister, Julia, come to town to talk her round and they also meet Jack and emphasize to him the danger that he is putting Della in, but, of course, he already knows that. None of their persuasion works; not that Jack won't try to stay away from her but that Della will not allow it. She continues to seek him out. The two eventually "marry," not in the eyes of the law, of course, but they consider themselves married (at least Della does) in the eyes of God.
Once I got past my annoyance with the beginning of the book, I found quite a lot to like about it. The writing really is beautiful. Marilynne Robinson seems to be of a philosophical bent herself and I gather she has written several essays that explore such subjects as the relationship between science and religion. So I guess all those philosophical discussions that her characters had were her way of addressing these interests in fiction. The story that she tells is fraught because of the times in which these people lived when interracial relationships were not just frowned upon but were actually illegal. And yet the love that these two people share in some ways insulates them from the world and certainly, in Jack's case it redeems him and makes him a better person.
I read somewhere that this will be the last in the Gilead series, which, if true, seems a shame since the ending of this story leaves us hanging. It would be nice to know how the love story turns out.
My rating: 4 of 5 stars
books Marilynne Robinson reading reviews