We Play Ourselves by Jen Silverman: A review 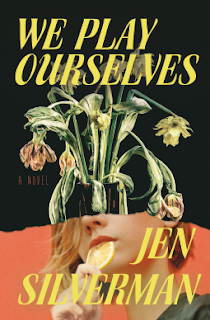 Writers writing about writers writing is a popular theme with today's novelists. It feels like every second book I pick up to read has a writer as the protagonist. And here we go again with Jen Silverman's We Play Ourselves. Her book is about a struggling playwright named Cass, now thirty years old, who has labored in New York for years trying to get her plays staged. We meet her at what might be her breakthrough moment. She has been named co-winner of a prestigious literary prize and her play will be produced with a talented director in charge. The only fly in the ointment is her co-winner, Tara-Jean, a college student playwright barely out of her teens. Her play is to be produced also.
On the opening night of Cass's play, she can hardly contain her excitement and nervousness. She feels that the performance goes well and at the after-party, she anxiously waits for the publication of the reviews. The most important one, the Times review lands with a thud. The reviewer mercilessly pans her play. Cass is devastated; nevertheless, the performances of the play continue.
Then Tara-Jean's play opens. The reviews come out and it is a triumph! The Times raves and everyone else follows suit. Cass is there for the after-party and she does something so outrageous that it seems unlikely she will ever be able to live it down. Her humiliation is complete and it seems that New York is not big enough for both her and Tara-Jean.
Cass needs to get away and, fortuitously, she has a friend who has a house in Los Angeles. She asks if she can come and stay with him and his partner for a while. The couple welcomes her and she settles in.
Soon she meets the next-door neighbor who is a filmmaker. She is presently making a documentary featuring several young women. Cass becomes involved in that project and, for a while, it appears that this may be her salvation, her way back to respectability. But the filmmaker is fairly unscrupulous in her manipulations of the young women in her documentary and when this becomes apparent, Cass is disillusioned.
Then Tara-Jean turns up. But it seems that she hardly even remembers who Cass is and if she does remember, she doesn't care. She doesn't hold a grudge. The two spend some time together and Cass has a kind of epiphany that allows her to understand the source of her jealousy of Tara-Jean and to begin to put all of that behind her. It helps that she has recently also found a new outlet for her creativity (no spoilers here), one that does not find her competing with Tara-Jean.
This, I thought, was an extremely well-written book. The images of the characters are razor-sharp. They are real people with all their warts but still sympathetic. The plot is well thought out and moves along at a good pace. I was never bored with the narrative and always felt compelled to turn the page and see what happened next. The bottom line is it was a very entertaining book to read. The situations presented were sometimes absurd but the humanity of the characters and their actions always shone through. Silverman, who is herself a playwright, obviously knows the life of the theater and those who work in it very well and she is able to present the intense environment of that milieu to the readers of this, her first novel, in a very readable fashion. I think she, too, may have found another outlet for her creativity.
My rating: 5 of 5 stars
books Jen Silverman reading reviews