Fossil Men: The Quest for the Oldest Skeleton and the Origins of Humankind by Kermit Pattison: A review 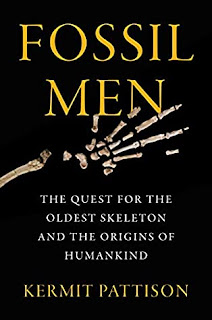 I got this book as a sort of companion to another book that I read earlier this year, The Sediments of Time by Meave and Samira Leakey. The books cover basically the same territory, literally, the Great Rift Valley of East Africa where the search for fossil human ancestors has been most intense. And they reference many of the same personalities, several of what we might term the rock stars of the fossil search. Meave's book is a memoir that, of course, focuses mainly on her family, the Leakeys, who are the First Family of the paleoanthropology world, but it also gives credit to the work of such people as Don Johanson of Lucy (Australopithecus afarensis) fame and Tim White who was also present at the Lucy find and at the 1994 find of what is, for now, the oldest known possible human ancestor at 4.4 billion years, nicknamed Ardi (Ardipithecus ramidus). Kermit Pattison's book focuses primarily on White and the Ardi find.
Tim White actually began his fossil-hunting career in Africa working with Richard Leakey. But soon enough his relationship with Leakey ruptured as both White and Leakey were intolerant of anyone who disagreed with them about the interpretation of their finds. When they disagreed with each other, that was the end of that! That is a recurring theme in Pattison's book. White, it seems, eventually falls out with almost everyone in the paleoanthropology world. One of the reviews that I saw of the book memorably describes White as Indiana Jones meets Tony Soprano. It is not an inapt description.
After his work with Leakey, White went on to work with Donald Johanson at the site in Hadar, Ethiopia where the famous Lucy was found in 1974. But eventually that relationship, too, ended in a Big Bang that in Pattison's telling left the two men virtually hating each other and seeking to undermine each other's work throughout the years.
One of the main takeaways from Pattison's book is the size of the egos of the men who spend their lives hunting fossils. And they are all men, "Fossil Men." Very few women make appearances in this book, although Mary and Meave Leakey do get a mention at least. It seems almost a prerequisite for the job that the paleoanthropologist be absolutely convinced of the rightness and righteousness of his position, his interpretation of events. Once he settles on a narrative, he leaves no room for dissension. We see this again and again as we follow the career of Tim White. He is a prickly personality that is completely ruthless in his search for new fossils. He is undeterred by war and pestilence and a whole army of intellectual enemies. The years that he spent in Ethiopia looking for ancient fossils were years when that country was ripped by civil war and conflict with neighbors and it was not uncommon for the exploration team to find itself in the middle of gunfights between the Issa and Afar tribesmen. The team actually lost some of its members to that conflict.
On the other hand, the personality that generated so many enemies also spawned an army of loyal friends. And when Tim White was your friend, he was your friend all the way. He was unusual among many of the scientists who worked in the region in that he was dedicated to training Ethiopians to be fossil hunters and to care about and protect the unique heritage of their region. Over the years, he trained many of the people who are now leaders of the profession in Ethiopia and who are heads of the museums where the fossils have been stored. Ethiopia has also tightened many of its laws in order to protect these precious fossils from exploitation. It's unlikely that any of those fragile fossils would now be allowed to undertake a six-year tour that Lucy did from 2007 to 2013. Today such tours employ casts of the fossils.
Kermit Pattison is a journalist and he is particularly good at explaining in an understandable way how the scientists are able to interpret the bones that they find and how they painstakingly build a picture of how ancient species are interrelated and how one may have evolved into another. That's often been represented as a tree, but current knowledge seems to run more to an image of a bush with very many branches, some of which never intersect. His ability to explicate all of this, especially when he explains why one little bump on the foot of Ardi led scientists to conclude that she was upright and bipedal at least for part of the time, is just fascinating and easy enough for a layperson to follow. Very seldom does he allow himself to get lost in the weeds of minutiae of his subject. The narrative flows, the characters are memorable, and the story is nothing less than the story of the history of our species. What more could one ask of a book?
My rating: 4 of 5 stars
books Kermit Pattison reading reviews