Poetry Sunday: What I Learned From My Mother by Julia Kasdorf

First of all, it must be admitted that not everyone has the blessing of an admirable mother. In fact, there are and have been some pretty awful mothers in the world and to the children of those mothers, all I can say is I'm sorry.

I did have an admirable mother and I learned many things from her, mostly from her actions rather than her words.

I think perhaps the most important thing I learned from her was empathy, caring for others. She spent her life caring for others. She had had a lot of tragedy in her life. The first one was losing her mother when she was only ten years old. She was a devoutly religious woman and I can still remember as a child hearing her pray that God would allow her to live until she could see me grown up. Of course, I did not then understand the source of the grief that led her to make such a prayer.

Because she had suffered loss, she understood the loss suffered by others and she always made a special effort to be there for them, to offer what comfort she could. And that's what I remembered when I read this poem.

What I Learned From My Mother


I learned from my mother how to love
the living, to have plenty of vases on hand
in case you have to rush to the hospital
with peonies cut from the lawn, black ants
still stuck to the buds. I learned to save jars
large enough to hold fruit salad for a whole
grieving household, to cube home-canned pears
and peaches, to slice through maroon grape skins
and flick out the sexual seeds with a knife point.
I learned to attend viewings even if I didn’t know
the deceased, to press the moist hands
of the living, to look in their eyes and offer
sympathy, as though I understood loss even then.
I learned that whatever we say means nothing,
what anyone will remember is that we came.
I learned to believe I had the power to ease
awful pains materially like an angel.
Like a doctor, I learned to create
from another’s suffering my own usefulness, and once
you know how to do this, you can never refuse.
To every house you enter, you must offer
healing: a chocolate cake you baked yourself,
the blessing of your voice, your chaste touch. 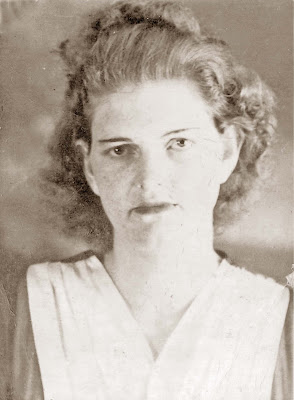 Reba Cromeans Aldridge, my mother, in the year that she became my mother. Now gone from this life since 2004. I miss her still.