The Plot by Jean Hanff Korelitz: A review 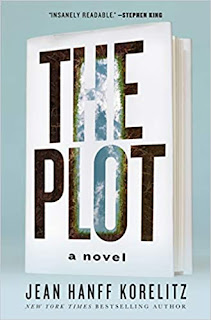 So here's yet another novel about a writer and the experience of writing. Particularly that part of the experience that involves writer's block and being completely devoid of ideas. In such a circumstance, any writer might do what Jacob Finch Bonner did.

Jake, the protagonist of this tale, had had two books published. The first one was mildly successful and was praised by The New York Times reviewer. The second one dropped like a stone and landed with a thud. Hardly anybody read it. Years passed and Jake tried unsuccessfully to write another book. He just couldn't come up with a plot. To keep body and soul together in the interim, he did a little editing and a little teaching. It was the latter that brought him to be an instructor in a graduate-level writing class at Ripley College in Vermont. And it was there that he had a thoroughly annoying student named Evan Parker.

Evan felt himself far advanced in relation to any of the other students and not really in need of any instruction from Jake. His confidence was based on what he believed was a surefire bestseller.  It was a plot that he felt certain would land him a big film deal and a spot on Oprah's couch. Everybody would want to read it and it would make a fortune for him. He was reluctant to share with his classmates but he did give Jake a couple of pages of text outlining his money-making plot. Eventually, he expanded on that in conference with Jake.

Jake had not been very impressed by Evan's excerpt, but when he heard more of the story, he had to agree with his student's assessment: It sure sounded like a winner.

The writing class ended. Students and teacher each went their own way. Jake continued with his editing and occasional teaching gigs. Two and a half years passed and from time to time Jake thought to check and see if that "surefire bestseller" had ever been published. Then, on googling Evan's name, he learned that his student had died only a couple of months after the writing class ended. Further inquiries revealed that Evan, who had had a known drug problem, had overdosed. He never got to write his masterpiece.

So, what's a down-on-his-luck writer with no ideas of his own to do when he knows that a great idea for a plot is going begging because the person who thought it up died before he could write it? You guessed it: He "borrows" the basics of the plot and writes the book. And it all turns out just as Evan had predicted. The book is a bestseller; Jake's book tour is standing room only everywhere he goes; he meets with an A-list director about a film deal; and he gets his turn on Oprah's couch.

His book tour takes him to Seattle where he's to be on the local blowhard's radio show. Before he goes on the show, he gets a four-word email: "You are a thief." To say Jake is unsettled is an understatement. This is what he has been dreading. He goes on the show which turns out to be a bit of a disaster. (The host really is an ignorant blowhard.) But he meets Anna, the blowhard's assistant who had scheduled him for the show. She turns out to be the love of his life.

Jake returns to New York. He continues to get increasingly threatening emails and texts accusing him of theft all of which he tries to ignore. Meantime, he's texting daily, incessantly, with Anna and soon she flies to New York to visit him. Soon after that, they are living together and Anna transforms his life, all for the better. Everyone, including Jake's parents, loves Anna which is reason enough for them to marry. Jake has never told Anna about the threats he is receiving and he continues to keep the secret as he also continues to try to determine who is threatening him. His investigations take him from New York to Vermont to Georgia, from a local tavern and a lawyer's office, and finally to a creepy campground and a cemetery. He never figures it out.

But I did. Maybe it's all those years of reading mysteries and thrillers and matching wits with their writers, but as soon as the relevant character was introduced in the plot, I knew immediately who it was and how this was all going to play out. I read the rest of the book while searching for the clues that would prove me right and they were there, hiding in plain sight. Feeling certain of how it was going to end did not spoil the reading experience for me. In fact, it might have enhanced it. Korelitz has constructed a particularly twisty plot. I have not read her books before, but I would say that she is not a writer who has a problem coming up with ideas. She has given us a mystery/thriller combined with a love story that is told through well-developed fascinating characters. All in all, it's a winner. One that will most likely be a bestseller, a major film, and may even land her on Oprah's couch.