The Portable Veblen by Elizabeth McKenzie: A review 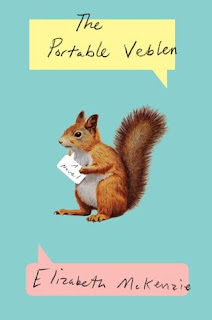 This book was published just over five years ago but somehow it only came to my attention recently. I'm glad that it finally found me because it was an absolute joy to read.
The title of the book might lead you to think that it is about iconoclastic sociologist/economist Thorstein Veblen (1857 - 1929) if indeed you had ever heard of him. Those of you who have ever had an introductory course in sociology as I did long ago will no doubt remember him as the coiner of phrases like "conspicuous consumption" and the author of the book The Theory of the Leisure Class. He had considerable influence on later economists like John Kenneth Galbraith. He also had influence on Melanie, the mother of our protagonist here. She named her daughter Veblen after Thorstein who was a distant relative.
Our Veblen is a thirty-year-old woman living in Palo Alto, California in an old cottage that she has rescued and renovated. Veblen describes herself as a "freelance self." She never finished college. She goes from one low-level administrative job to the next but spends her real passion on the translation work that she does for something called the Norwegian Diaspora Project in Oslo. Thorstein was a Norwegian-American and our Veblen is obsessed with him and with learning more about him which seems to have been the impetus for her learning Norwegian.
Veblen's other activities include reading, biking, and compiling trivia about squirrels, her other obsession. She takes daily antidepressants to keep her on an even keel. And, oh yes, she's about to be married. Her best friend, Albertine, is a Jungian analyst in training and she worries that Veblen's husband-to-be will not be able to tolerate her quirky personality in the long term.
Veblen's mother is a total narcissist and a hypochondriac, not a good combination. In her mind, everything is about her. She has a gentle, long-suffering husband, Veblen's step-father. Her father is in a psychiatric institution.
Veblen's quirkiness reveals itself most clearly in her passion for squirrels. She talks to them and believes that they communicate with her. She doesn't hear squirrel voices exactly; it is more like squirrel telepathy. There is one squirrel in particular that she believes follows her around. She encounters him wherever she goes, even in other cities.  The husband-to-be, Paul, on the other hand, has a very low tolerance for squirrels and wants to trap them all and release them in the forest. He is a research physician on a grant from Hutmacher Pharmaceuticals testing a device he has invented that is meant to treat brain injuries in soldiers in combat. It's a kind of hole puncher for the skull. Paul dreams of fame and fortune as a result of his invention.
Both Paul and Veblen are stunted in different ways by the childhoods they endured (Paul was the son of hippies who gave most of their attention to his disabled brother.) and this book is, in large part, a story of their struggle to escape the demons of their childhoods and build a productive and fruitful life together. In the process, it also manages to ding Big Pharma; tell us maybe more than we ever wanted to know about squirrels and Thorstein Veblen; present us with meditations on mental illness, family pathos, the nature of work and marriage; and often make us smile and shake our heads at the eccentricities and charm of a protagonist who marches to a different drummer.
I had never read Elizabeth McKenzie before. This is her second novel and the language of it is such a delight. It has a musical quality and is full of words one doesn't often see in print. She makes the jargon of economics and biology zing. They become memorable and fun to read. McKenzie also has a way of seeing the world and her characters from a different angle, not our standard and boring way of looking at things. The book has a lot of twists in the plot and a very satisfying ending. I loved Veblen and I can't think of a single thing about her or this book that I would change.
My rating: 5 of 5 stars
books Elizabeth McKenzie reading reviews