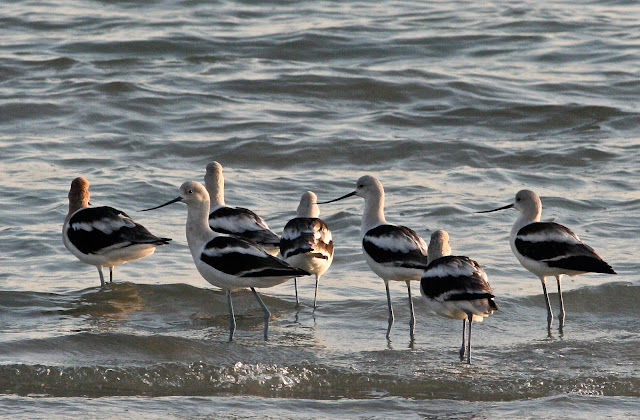 American Avocets photographed on the beach at Rockport, Texas.

This is a shocking story although not really surprising. The official death toll from the February freeze that hit Texas this year, turning off the electrical grid and running water for an extended period in much of the state, stands at 151. A recent analysis maintains that the actual death toll may be four or five times that number.

When the next disaster hits, FEMA may be better equipped to help deal with it. The Biden administration has doubled to $1 billion the fund that helps communities prepare for disasters.

Wind farms on the Pacific coast? It may happen. A stumbling block in the past has been military objections to the project but on Tuesday the Navy abandoned its opposition and joined the Interior Department to give its blessing to two areas off the California coast that the government said can be developed for wind turbines.

Things are not all rosy between conservationists and the Biden administration. Activists are strongly criticizing recent decisions regarding allowing drilling for oil on Alaska's North Slope, allowing oil and gas leases on public land in Wyoming, and continuing to allow the flow of oil through the bitterly contested Dakota Access pipeline. They argue that such moves clash with the president's pledges on climate change and will make those pledges harder to keep.

The buff-tailed bumblebee, native to Europe, is an introduced and invasive species in South America and it is causing problems for native hummingbirds. The bees actually steal nectar that would normally be available for the little birds.

Lake Charles, Louisiana has been particularly unlucky in regard to the weather it has received during the past twelve months. Last year it was squarely in the path of two powerful hurricanes. Last winter, along with much of the South, it suffered an extended and paralyzing freeze. And now it has been hit by devastating floods. The city received 15 inches of rain in one twelve-hour period in the last couple of weeks. (Around here we got about a foot of rain but at least it was spread out over ten days.)

Here's more on those "forever chemicals" that I mentioned in the roundup last week. Wastewater treatment districts across the country package and sell sewage sludge as home fertilizer. Now a study has found that the sludge contains alarming levels of toxic PFAS, the forever chemicals. This raises concerns that these chemicals are finding their way into vegetables that home gardeners raise.

A deadly eruption from one of the world's most dangerous volcanoes has caused the evacuation of tens of thousands of people in the Democratic Republic of Congo. An eruption of Mount Nyiragongo, near the major city of Goma, last Saturday killed more than two dozen people. The volcano threatens more eruptions.

In case you didn't get to see the supermoon/blood moon/lunar eclipse earlier this week, here are some views of it.

Birding and activities related to birds have long been mostly White people's hobbies, but that is changing. More Black people are getting involved and there is now a Black Birders' Week that promotes diversity in the hobby.

Here's a species portrait of the white-bellied pangolin, one of eight evolutionary distinct pangolin species that are split between Africa and Asia. All of them are threatened by overexploitation for their meat and scales.

The state of North Dakota has used taxpayer funds to finance the plugging of abandoned oil wells. Environmentalists say this constitutes a bailout for oil and gas companies and raises questions about who will pay to close off the nation's millions of aging wells during a transition to cleaner energy.

Researchers have found that people of color in every major city of the U.S. are exposed to more extreme urban heat than White people because they tend to live in "heat islands" - the census tracts within urban areas that have higher heat intensity. Just one more example of how systemic racism seems to pervade every corner of our society.

Big Oil had a really bad day earlier this and it couldn't have happened to a more deserving entity. Some even termed it a “cataclysmic day” in which three major oil companies received some comeuppance. In one case, investors rebelled over climate fears. Then a court ordered fossil fuel emissions to be slashed. This has sparked hope among campaigners, investors, lawyers, and academics who said the historic decisions marked a turning point in efforts to tackle the climate crisis.

Oman is an oil-producing country but it, too, is making efforts to move toward cleaner and greener energy. It has plans to build one of the largest green hydrogen plants in the world to be powered by wind and solar energy. It should be at full capacity by 2038.

What's in a species name? Sometimes it can be things like paternalism, colonialism, sexism, and racism. Species have sometimes been named for some pretty despicable people and there is a movement underway to try to correct that, to decolonize species names because they can create barriers to conservation.

The giant river otter that had been feared to be extinct in Argentina has been found there once again. Its sighting and identity have been confirmed.

And more good news for another giant: Scientists have confirmed that a giant tortoise found on the island of Fernandina in the Galapagos is a member of a species that had been thought to be extinct for a hundred years. They have compared the DNA of the female that was found in 2019 to that extracted from a male member of the species from 1906 to make the confirmation.

Here's some disheartening news: The number of smokers has reached an all-time high of 1.1 billion people. That's bad for the environment and for humans. Smoking killed almost eight million people in 2019.

In a further chapter of the story of the scam to privately finance a section of wall along our southern border, the fraud case against Stephen K. Bannon was formally dismissed by the judge this week because he said the pardon issued to Bannon by the previous president was valid and covered this case. Bannon's three co-defendants did not receive pardons and so will have to stand trial. Meanwhile, the "wall" they built looks as though a strong wind would blow it into the river.

A new book by ecologist Chad Hanson maintains that we need a better understanding of wildfires in order to more effectively fight climate change.

If you live in the eastern part of the continent and happen to have a close encounter with a Brood X cicada in the next several weeks, please try not to react as CNN report Manu Raju did!