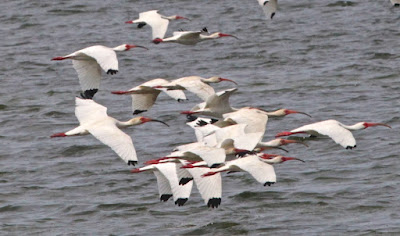 An Environmental Protection Agency report that was delayed for years by the previous administration was released on Wednesday and the news is not good. The report documents the changes that are a signal that climate change caused at least partly by human activity is intensifying and negatively affecting public health and the environment.

In other EPA action this week, the agency ordered a controversial refinery on St. Croix in the Virgin Island to be shut for 60 days because it poses an imminent threat to human health. The refinery had been permitted to open by the previous administration. Since February, it had showered oil on local residents twice, spewed sulfuric gases into the surrounding area, and released hydrocarbons into the air.

New research indicates that a third of global food production will be at risk from the effects of climate change by the end of this century if greenhouse gas emissions continue to rise at their current rate.

Thousands of seabirds are caught by fishing nets and hooks every year, helping to push some species toward extinction. What if there were some way to warn the birds away from the nets and hooks? 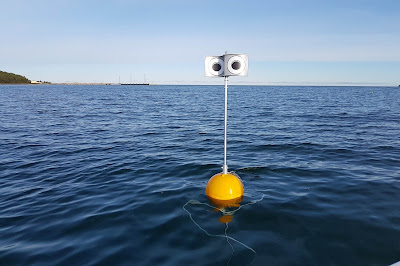 Well, here is something that is being tried. These googly eyes attached to buoys are intended to scare the birds away from the area. If I were a bird they would certainly scare me!
*~*~*~*
A new study has made the alarming discovery that air pollution from farms contributes to almost eighteen thousand deaths a year in the United States.
*~*~*~*
Chinese greenhouse gas emissions now account for 27 percent of the global total while the United States accounts for 11 percent. China's total surpassed those of the United States plus the rest of the developed world in 2019.
*~*~*~*
An alarming result from a recent study showed that the breast milk of American women contains toxic chemicals, creating a potential threat to newborns' health. The chemicals are polyfluoroalkyl (PFAS) substances that are called "forever chemicals" because they do not naturally break down and they have been shown to accumulate in humans.
*~*~*~*
A recent expedition spent 24 days clearing 10 miles of shoreline in the atolls and islands of the Papahānaumokuākea marine national monument in the remote Northwestern Hawaiian Islands. The team, led by a non-profit with support from state and federal agencies, collected 94,472 pounds of marine debris, aiming specifically for waste that poses an entanglement hazard to animals, such as derelict fishing gear, also called “ghost nets.”
*~*~*~* 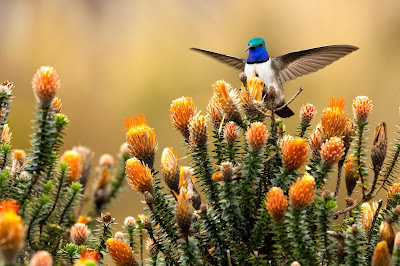 This beautiful creature is a Blue-throated Hillstar. The hummingbird was only discovered in Ecuador in 2017 and it has been at risk from the moment it was identified. Its habitat is under threat and the race is on to try to preserve it and save the bird.
*~*~*~*
A new analysis has found that an area of forest the size of France has regrown around the world over the past 20 years, showing that regeneration in some places is paying off. Nearly 59m hectares of forests have regrown since 2000, providing the potential to soak up and store 5.9 gigatons of carbon dioxide – more than the annual emissions of the entire US.
*~*~*~*
In another sign of the times, the city of Miami has appointed a chief heat officer who will be charged with putting together a task force to address the problem of rising temperatures. Last June, the city reported its hottest temperatures on record and there were dozens of heat-related deaths reported during the year.
*~*~*~*
Kenya has begun its first national wildlife census. The census will run until July, with rangers, researchers, and community members counting animals on land and from helicopters. The aim of the project is to aid conservation and identify threats to the country's vast but threatened wildlife populations.
*~*~*~*
The Masked Bobwhite, native to southern Arizona and northern Mexico, was once thought to be extinct, but the critically endangered bird is making a comeback in Arizona thanks to a decades-long recovery effort.
*~*~*~*
Incredible. The National Park Service, wanting to thin a population of bison in the Grand Canyon National Park that it says is harming the environment, opened a lottery to let a dozen skilled shooters kill bison on park grounds. Within 48 hours of opening the application portal, the NPS had received 45,040 applications for the 12 slots.
*~*~*~*
Scientists are attempting to understand the implications of the effects that climate change is having on the world's largest ice sheet, Antarctica, and what that means for the threat of sea-level rises. The uncertainty regarding what it means is very worrisome to these scientists.
*~*~*~*
Interestingly, birds responded to the lessening of noise pollution because of the pandemic by becoming quieter themselves. They sang more softly.
*~*~*~*
We need to do more to help the arachnid species of the world. Spiders are enormously important to a healthy ecology, but it seems that we have a poor understanding of how they are faring and we need to overcome any biases and fears we may have in order to better protect them.
*~*~*~*
Spain has approved a new clean energy climate bill in its efforts to become climate neutral by 2050 at the latest. But critics say the new law will not be enough.
*~*~*~*
The country has a new national park, the New River Gorge in West Virginia which became a national park and preserve on December 27, 2020. Many are delighted by the designation but some locals are worried that the area is not ready for the national spotlight.
*~*~*~*
The Velvet Scoter is a diving duck that is endemic to the Caucasus area of Europe and Asia. It was once thought to be completely extinct but a recent study showed that a small population of 25-35 breeding pairs still exist. The long-term survival of the species is in jeopardy.
*~*~*~*
According to the first complete assessment of how Nature-based solutions can combat the climate and biodiversity crises in the UK, regenerating native woodland, restoring grassland, and rewetting peatland should be priorities. This was the conclusion of more than 100 ecologists who examined how all kinds of landscapes – from urban to agricultural to coastal – could be enhanced to maximize carbon retention, biodiversity, and human wellbeing.
*~*~*~*
Margaret Renkl writes in praise of the miraculous cicadas.