Libertie by Kaitlyn Greenidge: A review 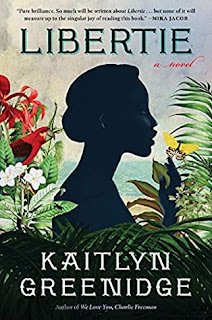 Libertie is the daughter of an African-American homeopathic practitioner in pre-Civil War New York.  Her father had died years before and her mother was left with the full responsibility for supporting herself and her daughter and raising the daughter alone. Her mother's fondest dream for Libertie is that she should go to medical school and that the two of them should practice the healing arts together.
Both mother and daughter are freeborn, but the mother is so light-skinned that she could pass as White and this works to her advantage later when she is able to treat both White and Black women at her clinic. Libertie, in contrast, has very dark skin like her father.
The mother is active in helping the enslaved reach freedom. One of those she helps is a man known as Ben Daisy who arrives at her clinic in a coffin. Libertie becomes fascinated with Ben Daisy and his pet name for her is "Black Gal." But he is a very troubled man who is haunted by the loss of the woman he loved. Libertie's mother tries to heal him of both the mental and physical effects of the brutalizing that he suffered in enslavement, but the attempt is doomed to failure when, in a bit of magical realism, the ghost of the lost love entraps him. Nevertheless, Ben Daisy and his fate play an important role in the narrative.
That narrative takes us through the years of the Civil War and into the Reconstruction era. During this era, Libertie's mother does begin to treat White women as well as Black. By this time, Libertie is assisting her mother in her practice, but the White women do not wish to be touched by this black-skinned young woman. Libertie, not unjustifiably, resents these women and their biases. Her release comes when she goes to Cunningham College in Ohio to study medicine, as her mother had dreamed. But Libertie soon learns that she does not have a facility for this study. Instead, she develops a passion for music and the arts. She meets two young women who perform as "the Graces" and she has the opportunity to sing with them. She realizes that she never really wanted to practice medicine and that is not where her talent lies. She is failing at her studies, a fact which she keeps from her mother.
Meantime, back home, her mother has taken on an apprentice, a young Haitian man called Emmanuel. He is a recent medical school graduate and he, too, has a light complexion. (A theme of colorism runs throughout the novel.) When Libertie goes home for a visit and meets him, the mutual attraction is immediate. He soon asks her to marry him and accompany him back to Haiti and his home in Jacmel. He assures her that they will have a "companionate marriage" because "it is only logical that a man and wife should share friendship and charity and understanding." But once they are on the ship to Haiti, the marriage starts to look quite different from what he had described.
Greenidge's descriptions of place, whether Kings County, New York or Jacmel, Haiti, or the ship, are very evocative and paint a vivid picture for the reader. They help us to understand the strictures felt by Libertie in her roles as her mother's assistant, as a student, and finally as a wife. She is freeborn but the societal confinement of assigned gender roles makes it impossible for her to be truly free. She finds that Haiti, while it may indeed be governed by Black men, is not necessarily a haven for Black women, especially a woman who doesn't understand the language or the culture.
The descriptive passages were the strongest part of Greenidge's narrative, in my opinion. The development of her characters was less successful. Although they lived in fraught and dramatic circumstances, they came across as somewhat bland and unformed. One didn't get the feeling that they truly "felt" those circumstances in which they lived. The only character who really seemed vivid to me was Ben Daisy.
The narrative did, however, offer a view of the barriers faced by Black women, even in the post-Civil War world in which barriers had supposedly been removed. Any reading of the daily news will convince one that, to a discouraging extent, many of those barriers still exist.
My rating: 4 of 5 stars
books Kaitlyn Greenidge reading reviews