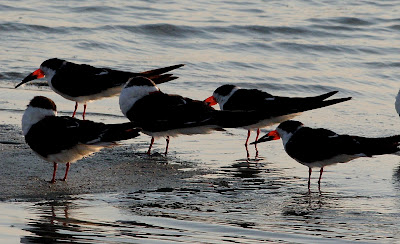 Black Skimmers in the late evening sun photographed on the beach at Rockport, Texas.

Once again federal scientists are predicting an "above average" Atlantic hurricane season. This follows the record season in 2020 when there were 30 named storms. The scientists say there could be 13 to 20 named storms this year with 6 to 10 being hurricanes and perhaps 3 to 5 reaching category 3 status or above.

And on the other side of the continent, severe drought, made worse by climate change, is ravaging the West. Heat and shifting weather patterns have also intensified wildfires and sharply reduced water supplies across the Southwest, Pacific Coast, and North Dakota.

A new study warns of "zombie fires." With a changing climate, fires in northern forests that smolder through winter and erupt again in spring are expected to become more common.

And now we are seeing climate refugees. Storms, floods, and wildfires, in addition to conflicts, caused the displacement of 40.5 million people around the world in 2020.

The Chimney Swifts have returned to our area. I hear their twittering throughout the day when I am in the garden and I often hear them in the chimney when I'm sitting in my living room. Swifts around the world often have trouble finding nesting places because of the loss of their preferred habitat, but in Britain, they are getting some help. A product called "bird bricks" is being used in construction projects to provide a safe niche for the birds' nests. 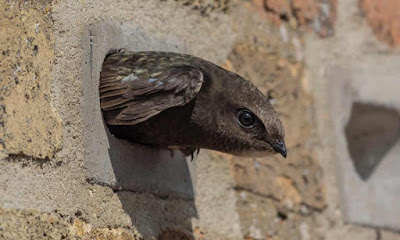 A swift emerging from a bird brick. 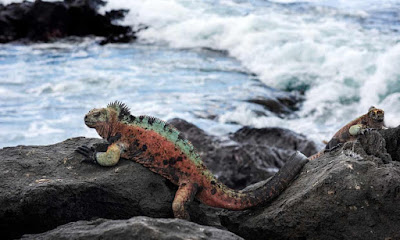 Marine iguana on Floreanna Island in the Galapagos.

The actor Leonardo DiCaprio is teaming with conservation groups in an effort to rewild the Galapagos Islands and other Pacific islands in Latin America. DiCaprio has pledged $43 million to the campaign to conserve the islands. One of the projects that the money will fund is the restoration of Floreanna Island, home to 54 threatened species. They will reintroduce thirteen locally extinct species including the Floreanna Mockingbird, the first mockingbird described by Charles Darwin in his exploration of the islands.

One thing they won't be able to conserve is Darwin's Arch. The famous rock formation in the Galapagos collapsed into the sea this week as a result of natural erosion. 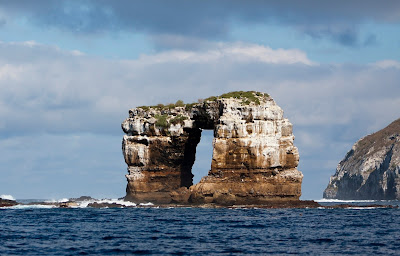 The famed arch before its collapse.

*~*~*~*
A comprehensive new analysis has found that twenty companies are responsible for producing more than half of all the single-use plastic waste in the world, fuelling the climate crisis and creating an environmental catastrophe. Among the global businesses responsible for 55% of the world’s plastic packaging waste are both state-owned and multinational corporations, including oil, gas, and chemical companies.
*~*~*~*
If you are looking for good books about wildlife and our relationships with them, look no further: The Revelator has you covered. Here is a list of ten new books about wildlife.
*~*~*~*
The International Energy Agency urges investors to refrain from funding new oil, gas, and coal supply projects in order to help the world reach net-zero emissions by mid-century.
*~*~*~*
Arizona's Republican Attorney General has filed a lawsuit framing the climate crisis as a nativist issue, absolving natives and blaming migrants for environmental degradation. Are you as touched as I am by his concern for the environment?
*~*~*~*
And here's a prickly subject: It seems there is a black market in cacti. There is a flourishing illegal international trade in the plants and people are digging them up from deserts, including endangered and protected plants, and selling them to the highest bidder.
*~*~*~*
Brood X cicadas are emerging in the East but it appears they are absent from some areas where they would normally be expected.
*~*~*~*
What if we can't save everything in Nature? How do we choose where we will apply our efforts to conserve? The National Park Service is being forced to make such choices. Park ecologists are performing triage, deciding what to safeguard and what to let go.
*~*~*~*
The Revelator online magazine is celebrating its fourth anniversary and it shares ten important things they have learned in those years.
*~*~*~*
We know some of the problems that invasive plant and animal pests create in our country, but this is a worldwide problem. In Africa, invasive pests could cost the agricultural sector $3.5 trillion per year, according to a new study released this week.
*~*~*~*
The toxicity of 381 pesticides used in the U.S. has more than doubled for pollinators and aquatic invertebrates over the last two decades, according to a new study. Toxicity actually dropped for birds, fish, and mammals, but this made way for greater use of neonicotinoids and pyrethroids, deadly for insects of all kinds.
*~*~*~*
There has been a drastic drop in Arctic wildlife populations and that seems almost entirely due to the effects of global climate change.
*~*~*~*
A new study shows that sharks have their own built-in GPS guidance system that uses Earth's magnetic field.
*~*~*~*
On Thursday a group of scientists urged the Biden administration to restore legal protections for gray wolves, saying their removal earlier this year was premature and that states are allowing too many of the animals to be killed. The U.S. Fish and Wildlife Service dropped wolves in most of the lower 48 states from the endangered species list in January. The decision was among more than 100 actions the previous administration took related to the environment that President Joe Biden ordered reviewed after taking office.
*~*~*~*
A colony of monkeys has lived for about seventy years in urban south Florida. Researchers at Florida Atlantic University (FAU) say they have now traced the colony’s origins to the Dania Chimpanzee Farm. The South Florida SunSentinel reported on Wednesday there was a monkey escape from the farm in 1948, with most of the monkeys recaptured. But not all of them. Today there are around forty of the animals living wild in the area.