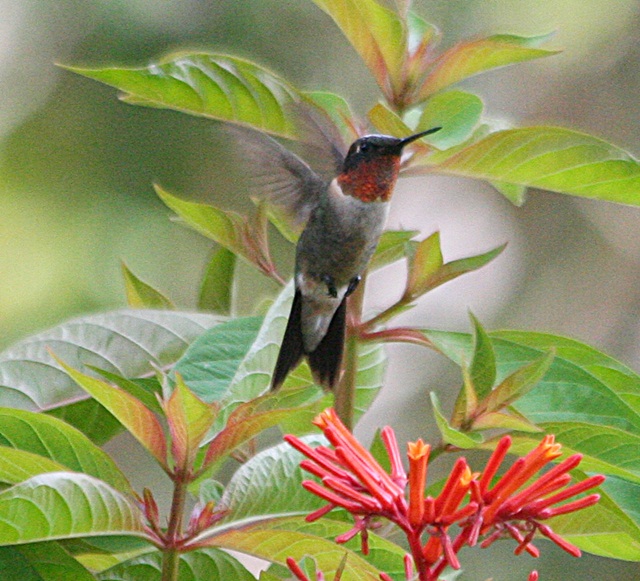 The fall migration of Ruby-throated Hummingbirds is ongoing. A male hovers over Hamelia patens (aka hummingbird bush or Mexican firebush) blossoms in my backyard.
*~*~*~*
With wildfires raging through the western states this summer and a warming climate projected to increase the incidence of wildfires in the future, it is possible, even likely, that some of the forests that are burning will not regenerate as forests but as grasslands and shrublands, completely changing the ecology of the region.
*~*~*~*
As expected, Native American and environmental groups have filed suit to stop plans for leasing the Arctic National Wildlife Refuge for oil and gas drilling.
*~*~*~*
Redwood trees can live for thousands of years which must mean that they are able to withstand adversity. That includes wildfires. There were fears that the trees in an old-growth grove in Big Basin Redwoods State Park in California might have succumbed to recent fires, but it has been confirmed that most of the trees have withstood the blaze.
*~*~*~*
Miramar, a suburb of Wellington, New Zealand, has been quietly waging war on invasive predators such as rats, weasels, ferrets, possums, and stoats. Conservationists are out to rid the area of these predators as a way of protecting native birds, many of them flightless or ground-nesting. They are very near to accomplishing their goal.
*~*~*~*
Research suggests that 60% of Antarctica's ice shelves are in danger of collapse. Such a loss would accelerate the loss of the Antarctic ice sheet and would increase sea-level rise.
*~*~*~*
Researchers are finding traces of PFAS chemicals ( a group of synthetic chemicals often called "forever chemicals") in seabirds. These chemicals can damage organs and they are obviously present in the oceans of the world where these seabirds live. They have the capacity to do great harm to wildlife and ultimately to human life as well.
*~*~*~* 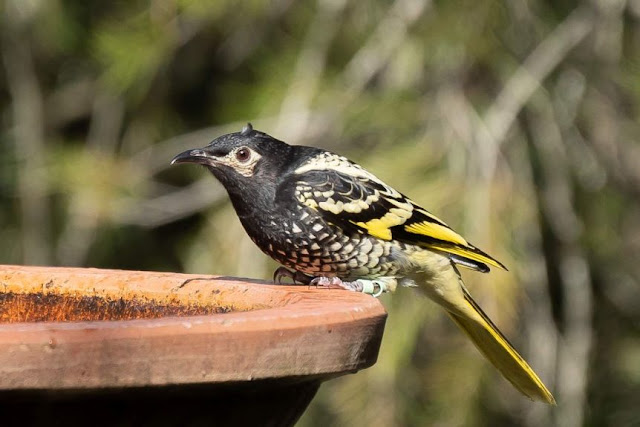 This is a Regent Honeyeater, a bird native to Australia. There is a captive-breeding program in progress designed to increase the threatened bird's population. Recently, a released captive-bred bird has led conservationists to a previously unknown wild flock.
*~*~*~*
Climate change is posing many problems for states like California that are mired in severe drought. How do governments, and indeed individuals, plan for a future that will be so affected by a warming climate?
*~*~*~*
Lice are among the parasites that afflict humankind and others on land, but one might think that one would be able to escape them in the sea. Apparently, one would be wrong.
*~*~*~*
Companies around the world are lining up for the privilege of mining the planet's seabeds for minerals. This could do untold damage to deep-sea life. We need an international framework to govern such explorations, one that will protect underwater life and prevent environmental harm.
*~*~*~*
"Routine flaring" from oil wells produces emissions that harm the climate and human health. Some states, like New Mexico and Texas, are trying to get a handle on the problem with new rules aimed at reducing emissions.
*~*~*~*
One of the California wildfires has destroyed a sanctuary for the endangered California Condor. The fate of several of the condors that lived there is unknown.
*~*~*~* 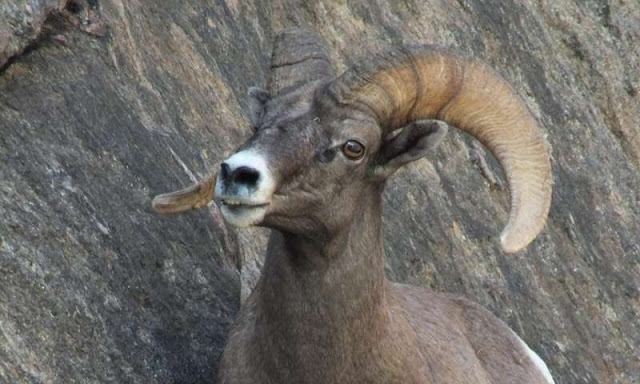 A bighorn ram on a cliff in Grand Canyon National Park.

Native desert bighorn sheep that live in ecologically intact areas are better able to withstand the challenges posed by climate change, according to a new study conducted by Oregon State University.

The Associated Press has found that thousands of oil and gas operations, government facilities, and other sites have won permission to stop monitoring for hazardous emissions or otherwise to bypass rules intended to protect health and the environment. The coronavirus outbreak is given as the excuse for the loosening of regulations.

Wolverines are rare in the United States but for the first time in over one hundred years, they have returned to Mount Rainier National Park in Washington state, according to an announcement from the National Park Service. 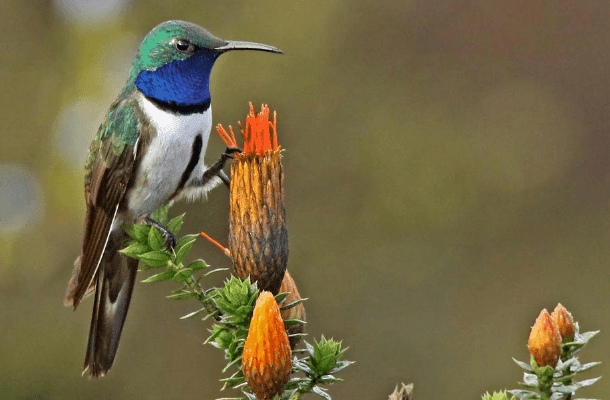 The recently established Cerro de Arcos Reserve in Ecuador will provide critical habitat for the Blue-throated Hillstar, a hummingbird that was only discovered in 2017.

Wind turbines can be deadly for birds in flight, but a new study shows that simply painting one of the turbine blades black can reduce bird strikes by up to 70%.