Pleasantville by Attica Locke: A review 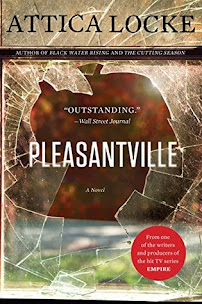 I read Black Water Rising, Attica Locke's first novel, earlier this year and I was eager to read this one which is a sequel. I decided not to deprive myself of that pleasure any longer.

Pleasantville, which takes its name from a Houston suburb built expressly for upwardly mobile Black people, is set fifteen years after the events of the first book. It is 1996 and much has happened in those intervening years. One notable event that has some relationship to the plot of this book was the closing of the venerable Houston Post in April 1994.  The money-grubbing, non-journalist owner decided to shut down with no warning to the employees. (If I sound bitter, it is only because I am.) So, by 1996, the Houston Chronicle is the only daily newspaper.

Much has happened in attorney Jay Porter's life as well. He has become more widely known and successful after his victory in the Cole Oil case that the previous book recounted. But his personal life is in shambles after his beloved wife died of cancer the year before. He is left to raise a teenage daughter and his younger son on his own and he doubts he is up to the challenge. In response, he has virtually given up his practice in the interim. He presently has one case pending; he is representing the community of Pleasantville in its suit regarding a chemical fire that caused severe damage. But the case seems to be going nowhere and some of his clients are beginning to question his dedication to it.

In 1996, Houston is in the midst of a mayoral campaign that pits a Black former police chief against a woman district attorney. (Like her first book which detailed the election of the first woman mayor of Houston, parts of this book are loosely based on the election of its first Black mayor, Lee Brown.) The campaign threatens to get nasty as one side employs the dirty tricks playbook, but then an unexpected event scrambles everything. A young woman disappears from a street corner in Pleasantville. She had apparently been distributing flyers for one of the campaigns. A few days later, her brutalized body is found near the railroad tracks.

The murder recalls the earlier disappearance and murder of two girls from Pleasantville. Those murders were never solved. Although the circumstances of the new murder are somewhat different, Jay Porter and his friend, who had been a reporter for the Houston Post and had covered the other murders, suspect that all three are related. But how to prove that, especially when the police seem to be dragging their feet and the Houston Chronicle barely mentions the murder? When the investigative reporter from the Post had left the building on that final day of the newspaper, she had managed to take a box of her notes with her. Among those notes are her interviews and findings regarding the two earlier murders. That provides a starting point for trying to find out what happened this time.

Jay feels bound to Pleasantville because so many of the residents are his clients and he knows the family of the girl who was killed. Then the nephew of one of the mayoral candidates (the former police chief) who was deeply involved in the campaign is arrested for the murder and the whole thing begins to smell like a political hit job. The family wants Jay to defend the young man. He feels an obligation to look into the matter and he and his team of a private investigator, the former reporter, and his office assistant get to work to try to find a way of proving their client didn't do this heinous crime.

It's fun to watch as the team goes about connecting loose ends and pulling the story together. Early on, I identified a suspect and I waited for the investigators to come to the same conclusion I had. In the end, it turned out I had been right all along! Very satisfying.

Attica Locke is an excellent writer who obviously knows Houston very well. Her explication of the political chicanery and the legal scheming and planning that goes on behind the scenes just adds another layer to an already intricate plot. That being said, I found the plot not at all difficult to follow. Locke is swiftly becoming one of my favorite writers of thrillers.