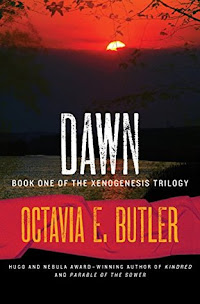 I don't dream about the books that I am reading - at least not dreams that I remember upon waking. But in the middle of reading this book, I found myself dreaming vividly about it one night. I was there on the great ship of the Oankali orbiting Earth somewhere beyond our moon. I was standing with one of the tentacled aliens who was showing me the view from space and I could see the "blue marble" of Earth far, far away, looking about the size of a marble. It was such an amazing feeling that when I woke up it seemed to me for a moment that it had really happened. That is the power of Octavia Butler's prose.

She tells us of a time when Earth has been made uninhabitable for humans by a nuclear war between the U.S. and U.S.S.R. (The book was written in the 1980s.) Humans who survived the catastrophe were rescued (captured?) by the Oankali, an extraterrestrial race with multiple tentacles extending from their bodies. The tentacles are described in one place as looking like Medusa's "hair." They are about as alien-looking as one can imagine. The humans were put into suspended animation and were studied by their rescuers/captors. From time to time they were awakened individually and then suspended again if they became uncooperative or obstreperous or had served their purpose.

Lilith Iyapo has been awakened and suspended more than once, but now it is 250 years after the war that ravaged Earth and the planet is once again habitable. The Oankali plan is to send humans back to Earth to start over again and Lilith has a large part to play in their plans.

The Oankali's benevolent plans to reseed Earth with humans is not without a price. They are genetic traders and their ultimate goal is to meld their race with humanity, creating a hybrid human/Oankali race that will forever change what it means to be human. The plan is to have "improved" humans who will not again destroy themselves.

The Oankali exist in three sexes - male, female, and Ooloi. The Ooloi have the capacity to engage in three-way mating with a human male and female, using their ability to control the human nervous system to create pleasure. The Ooloi feels every sensation that its human partners feel. If it causes pain, it feels that, too, and so it is careful not to cause pain. The Ooloi sees nothing wrong with this; it is simply a part of its nature, but as I thought about it later, I could see that it has some disturbing implications from a human standpoint. The humans are essentially captives and do not have much choice in the matter. Is this not rape, even if the person's body responds and even if the person is not hurt if that person objects? Indeed at one point, Nikanj, the Ooloi paired with Lilith, says to the unhappy male partner in their threesome, "Your words say no but your body did not."  Ewww! Humans have no choice about accepting these three-way liaisons if they want to go back to their home planet. They are in effect forced marriages.

After Lilith is awakened and finally becomes resigned to acceding to the Oankali plan for her, other humans are awakened. Males and females begin to pair up and group dynamics begin to assert themselves, not always in a positive way. Lilith becomes a kind of teacher and group leader who is expected to prepare the group for their return to Earth. Some males in the group resent the fact that their leader is a woman and sexism rears its ugly head.

Butler was actually brilliant at presenting this picture of the workings of the human group in all its prejudices, selfishness, and pettiness, even in a biological space ship far from Earth and even in the presence of an alien culture that is about as different from human culture as could be imagined. (For one difference, there's the lack of violence and of jealousy.) Human foibles and weaknesses assert themselves in spite of everything.  Butler presents us with very hard questions about human nature and its perfectability - or lack thereof. In the end, are the humans victims of Stockholm syndrome where they simply accept the role their captors assign to them and do what they need to do in order to survive? She makes clear that the aliens' intent, from their perspective, is entirely benign. But when does that intent become paternalistic and how much psychological and physiological manipulation is reasonable?

The narrative is never accusatory. Butler writes in a very straightforward manner, without flourishes, almost as a scientific treatise. She is careful not to present opinions, only the facts, and she lets us draw our own conclusions. No purple prose here. That careful telling, I think, is what gives the book such power. It is at once both beautiful and deeply disturbing and gives us much to think about.

This is the first book in a trilogy and as such, it sets the stage for what is to come. It gives us all the background we need to continue the journey. And continue the journey I will. I look forward to reading more of the amazing world that Butler imagined for us.