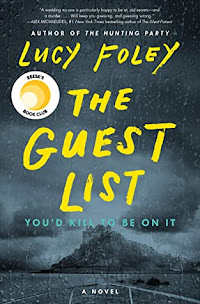 On a remote island off the east coast of Ireland, a wedding is planned. It will unite a powerhouse digital magazine editor and a popular television star of a reality (but not really) survival series. The guest list for one of the most buzzed-about social events of the year brings together old friends, classmates, and family of the wedding couple. A professional wedding planner and her husband, a chef, are in charge of the event and it has been planned to perfection. But the plans could not have anticipated the long-buried guilty secrets and resentments that the guests will bring with them. Nor could it have anticipated that a storm would trap them all on the island. And then to put the icing on this wedding cake, a dead body turns up. And the death did not come from natural causes. Who could have wished the happy couple ill? And why?

A review that I read of this book - the one that convinced me that I had to read it - described it as a mashup of an Agatha Christie novel and a gossip tabloid. That sounded irresistible to me and it proved to be so. The book is essentially a "locked room mystery," recalling such Christie classics as The Murder of Roger Ackroyd and And Then There Were None, still two of my all-time favorite Christie reads. The Guest List is closer to And Then There Were None since they both transpire on islands where a group of people are temporarily stranded.

This particular island is a place haunted by a dark history. Add the fog and the treacherous peat bogs and you've got the perfect atmospheric location for a mystery. Moreover, as we get to know the backstories of various members of the wedding party and the wedding planner, we learn that the glittering facade often hides tragedy. Just as the sainted Agatha would, Lucy Foley provides all the clues we need throughout the narrative to solve the eventual murder that takes place. The clues hide there in plain sight. It really is a masterful bit of plot construction.

We get to know intimately the wedding planner, the bride, the groom, the bridesmaid (bride's half-sister), the best man (groom's best friend - or is he?), the "plus-one" wife of the bride's best friend, and various ushers, the groom's bro-gang from his school days. And as we get to know them, we get to dislike many of them. They really are wicked and sometimes truly nasty bits of work. The only ones who really come across sympathetically are the wedding planner, the bridesmaid, and the plus-one. And over the course of the wedding weekend, the tensions that had been sublimated by the group begin to rise to the surface and culminate is full-blown violence that finally results in the death of one of the party. Who? I won't tell. Why? Now, there is the puzzle for the reader.

That puzzle isn't fully revealed until the end of the book. Actually, the murder itself only takes place near the end. The tension for the reader of feeling certain that something bad is going to happen (and maybe having a preferred candidate for that "something bad") but not knowing what it is or when it might occur makes for a propulsive reading experience. Once I was engaged in the story, I found it really, really hard to put the book down. And when I was forced to, I was still going over the elements of the story in my mind and trying to figure out what would happen next.

This was the first book of Foley's that I've read. Color me suitably impressed. I'll be looking for other of her books to read.