28 Summers by Elin Hilderbrand: A review 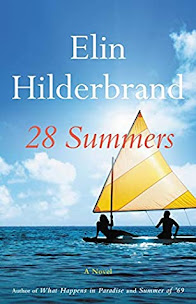 Elin Hilderbrand really does represent the gold standard when it comes to beach novels. Last summer I read her Summer of '69 and thoroughly enjoyed it, so I was looking forward to reading her 2020 entry to her beach oeuvre. She did not disappoint.

28 Summers begins in 1993. No, actually that's wrong. It begins with the ending and so we know up front that Mallory Blessing will die much too young from cancer in 2020. But after introducing us to Mallory on her deathbed, she takes us back to 1993 where it all began.

Mallory, a Baltimore girl, had been living quite unhappily in New York with her best childhood friend. Her life was going nowhere and she was looking for a way out. That way out came from a most unexpected direction. An aunt dies and bequeaths to Mallory her summer cottage on Nantucket, a cottage where Mallory had spent many happy summers growing up. She takes possession but knows right away that this will not be a summer cottage for her; this will be her permanent home.

She sets about finding a job, getting to know her neighbors, and generally making herself at home on the island. Then her brother asks her to host a bachelor party for him on Labor Day weekend. She happily assents and her brother and two of his friends, Fray his childhood buddy and Jake McCloud his fraternity big brother at Johns Hopkins, show up for the weekend. But then Fate intervenes and, the first thing we know, both her brother Cooper and friend Fray have absconded for different reasons leaving only Jake.

Now, Mallory had long had a bit of a crush on Jake but had never spent time alone with him. They decide to go ahead with the weekend that she had planned and before the weekend is over, the two of them are in love. Unfortunately, Jake is already committed to his childhood sweetheart Ursula and he feels unable to give her up and Mallory doesn't make any demands. Instead, the two make a pact to have a "same time next year" affair. And so, every Labor Day weekend for 28 years, whatever has happened in their lives in the intervening year, Jake returns to the island and the two resume their relationship. They have no contact of any kind for the rest of the year.

Eventually, Jake does marry Ursula and they have a daughter. Mallory never marries but she has serial affairs and has a one-night stand with Fray which produces a son, Lincoln (Link).

At the start of each chapter (each chapter delineates another year's Labor Day weekend), Hilderbrand gives us a brief rundown of pop culture and the topics that were absorbing our attention in that year. This was actually one of the most interesting things about the narrative for me and it helped to anchor me in time as each year came along.

Hilderbrand writes of thoroughly nice people. Yes, there are some minor hiccups in behavior, but at heart, her characters are people who care about others and who want to do what's right. They don't want to hurt anyone. In other words, this is escapist literature, but when were we ever more in need of an escape?