The Glass Hotel by Emily St. John Mandel: A review 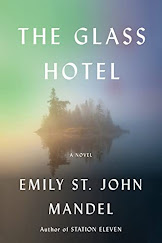 The story begins in 1999 at a luxury hotel in British Columbia. A woman with the unusual (for a woman) name Vincent is the bartender there. She is young and beautiful. Her half-brother Paul also works at the hotel. Paul had been a bit of a loser in life so far and Vincent had interceded to get him the job there.

Fabulously wealthy financier Jonathan Alkaitis owns the hotel. On a day that Alkaitis comes to visit the hotel, a sentence etched in acid appears on its large glass window. The sentence says, "Why don't you swallow broken glass." It isn't clear who wrote the message, but we eventually learn that it was Paul, at the behest of another guest at the hotel. The message was apparently meant for Alkaitis.

Alkaitis, who is described as looking a bit like Santa Claus, is smitten with Vincent and he makes her an offer she can't refuse. She is to live and travel with him in the role of his trophy wife. She leaves with him and spends the next several years living a life of indescribable luxury.

Paul, meanwhile, continues to mess up but eventually gets his life together and earns some success and renown as a composer of music videos.

In time, we learn that Alkaitis' wealth is built on a Ponzi scheme that sounds very much like that of Bernie Madoff. And Alkaitis and his associates end up in the same place as Madoff - in prison.

Vincent cuts and colors her hair, adds glasses, and utterly changes her appearance. She escapes the public view and goes back to work in the profession that she knows best. Finally, she has an opportunity to go to sea as an assistant chef on the Neptune Cumberland. She jumps at the chance.

Back in prison, Alkaitis begins seeing visions of people that he has wronged, people who trusted him with their life savings and lost everything. In a subsequent meeting with a doctor who tests his cognitive ability, it appears that he is losing it, but we never actually see a resolution to that.

Thirteen years after leaving that hotel in British Columbia to be Alkaitis' companion, Vincent disappears over the side of the Neptune Cumberland one night. Did she jump? Did she accidentally fall? Was she pushed?

In a very common method of storytelling these days, Mandel jumps around in time quite a lot and it's not always easy to figure out the sequence of events. Does the juxtaposition of happenings actually add anything to the story? Hard to say. It just seems to be obligatory for many modern authors of literary fiction.

Mandel's narrative seems constructed to emphasize the ways that random lives can intersect and may or may not affect each other. None of the characters in this story really "grabbed" me as a reader. They remained rather opaque and flat. The storyline of the Ponzi scheme and its effect on people's lives was fascinating and well-written. Even I could (sort of) understand it.

This was my first experience reading Mandel. It won't be my last.