Intimations by Zadie Smith: A review 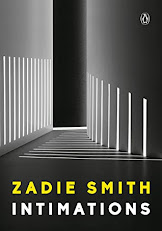 This short book of essays by the wonderful writer, Zadie Smith, is chock full of wisdom and apt observations of the unique time in which we inhabit this planet. The book is only around 100 pages long, but it reads much bigger than that.
The essays all appear to have been written in this year of the pandemic, some quite recently. There is one, for example, that references the heinous murder of George Floyd and the resulting social unrest as people have continued to take to the streets in protest. The writer says in her foreword that she has tried to organize some of her feelings and thoughts about events so far (which would have been the first half of the year) in this year that begins to seem more like a decade fraught with so much anxiety and stress.  "These," she writes, "are above all personal essays: small by definition, short by necessity."
I think my favorite of the essays is the one titled "The American Exception," from which I offer this extensive quote about our attitude toward death in this pandemic:

We had dead people. We had casualties and we had victims. We had more or less innocent bystanders. We had body counts and sometimes even photos in the newspapers of body bags, though many felt it was wrong to show them. We had "unequal health outcomes." But, in America, all of these involved some culpability on the part of the dead. Wrong place, wrong time. Wrong skin color. Wrong side of the tracks. Wrong Zip Code, wrong beliefs, wrong city. Wrong position of hands when asked to exit the vehicle. Wrong health insurance - or none. Wrong attitude to the police officer; What we were completely missing, however, was the concept of death itself, death absolute. The kind of death that comes to us all, irrespective of position. Death absolute is the truth of our existence as a whole, of course, but America has rarely been philosophically inclined to consider existence as a whole, preferring instead to attack death as a series of discrete problems. Wars on drugs, cancer, poverty, and so on. Not that there is anything ridiculous about trying to lengthen the distance between the dates on our birth certificates and the ones on our tombstones: ethical life depends on the meaningfulness of that effort. But perhaps nowhere in the world has this effort - and its relative success - been linked so emphatically to money as it is in America.

In another essay called "Suffering Like Mel Gibson" the writer plays on the movie that Gibson made called "The Passion of the Christ" to talk about the relativity of suffering. She wonders whether Christ's agonies on the cross, "when all was said and done, were relatively speaking in fact better than those of the thieves and beggars to his left and right whose suffering long predated their present crucifixions and who had no hope (unlike Christ) of an improved post-cross situation." The essay is essentially about privilege and the stubbornness of inequality.
There is much to contemplate in each of these essays, written by a woman who obviously has thought deeply about the issues that she presents to us in a serious manner but not without humor. Her second job is as a teacher and she seeks to instruct us here through her writing.
It is fitting that the royalties from this book will go to two charities, The Equal Justice Initiative and the COVID-19 Emergency Relief Fund for New York.
My rating: 4 of 5 stars
books reading reviews Zadie Smith