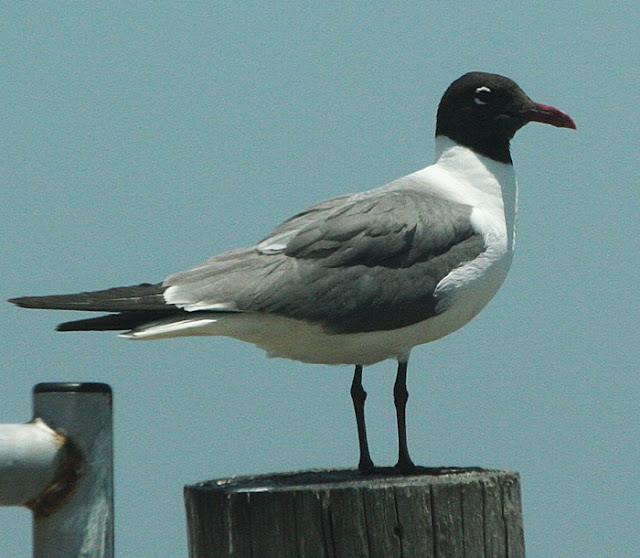 Laughing Gulls are the most common gull in this area. I caught this one standing at attention on a post at Anahuac National Wildlife Refuge.

The past decade was the hottest ever recorded globally, while 2019 was either the second or third hottest year ever recorded. The planet's warming is accelerating and the past six years, 2014 to 2019, have been the hottest since global records have been kept.

In this era of social distancing, our 13 national seashores and lakeshores offer attractions featuring water and long stretches of beach that make social distancing a possibility while also offering people a chance to connect with Nature and a respite from being indoors.

Referencing a quote from To Kill a Mockingbird, a federal judge in New York invalidated rule changes by the current administration that would have allowed individuals and corporations to kill scores of birds as long as they could convince a court that they did not do it intentionally. She thus upheld the protections received by birds under the Migratory Bird Treaty Act.

Experts at the San Bernardino National Wildlife Refuge in Arizona repeatedly warned the Department of Homeland Security of the grave threat to rare and endangered species that would be posed by the construction of a wall on the border there. Their warnings were completely ignored and construction continues.

Large solar farms in America kill thousands of birds every year. Scientists are working to determine why this happens and how deaths can be prevented while still producing clean renewable energy.

This is the prime season for moth watching and since there are more than 11,000 species of moths in North America, there is plenty of opportunity for observing them. This compares to around 700 species of birds and 750 species of butterflies.

Canada's last intact ice shelf, the 4,000-year-old Milne Ice Shelf on the northwestern edge of Ellesmere Island, has broken apart due to the warming climate. Satellite photos showed that about 43% of the shelf had broken off.

The current administration is revoking rules that require oil and gas drillers to detect and fix leaks of methane, the greenhouse gas that heats the planet even faster than carbon dioxide.

In 2003 the small Japanese town of Kamikatsu set an ambitious goal of being 100% waste-free by 2020. While the town made remarkable progress, it has ultimately fallen short of its goal. But it has been able to identify the problem: It's single-use plastic. We must find a way to remove this from our lives in order to achieve the ultimate elimination of waste.

The U.S. Fish and Wildlife Service has announced plans to reduce protected critical habitat for the Northern Spotted Owl. There is a 60 day period for public comments on the plan which opened on August 11.

A recent study of plant communities in the Amazonian region should help in the planning of future conservation efforts. Scientists studied the distribution of more than 5,000 woody species (trees and shrubs) in 301 plant communities scattered all over the Amazon.

Canada's westernmost province of British Columbia has more than 2,000 species of plants and animals that are endangered and at risk of disappearing; however, the province has no endangered species law to provide protection for them.

The rapid decline of U.S. bird species is being spurred by the use of deadly pesticides such as those containing neonicotinoids. These pesticides inhibit the bird's ability to successfully reproduce. Moreover, studies have found that the effects of the pesticides can linger for years after they are ingested.

Following the Chernobyl radiation disaster in 1986, much of the deserted region has become forested. In the warming climate, forest fires have become more prevalent and those fires are releasing the stored radiation into the atmosphere.

Plant species that depend on wind for pollination and seed dispersal are facing increased challenges as the warming climate forces them to shift their ranges, according to a new study.

One of the unfortunate side effects of the COVID-19 pandemic has been an increased utilization of single-use plastics, one of the most pernicious elements in human pollution of the environment.

Large swathes of Germany's farmland are being decimated by a plague of field mice which has led to significant crop loss, according to the country's national farming association. An estimated 120,000 hectares have been stripped bare by the rodents and are now browning in a heatwave.

In a rare case of Nature taking on a manmade machine and winning, a Bald Eagle attacked a government drone flying over Lake Michigan on an environmental monitoring mission. The eagle apparently saw it either as a threat or as prey and attacked, sending the drone to the bottom of the lake.