Pew by Catherine Lacey: A review 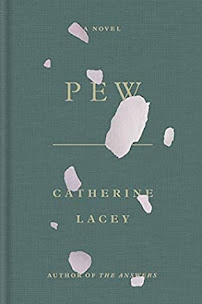 It begins with a young person who has been living on the streets finding unlocked a side door to an unnamed church in an unnamed town and entering, gaining a place to sleep safely for the night on one of the pews. We know the person is young, but that is really all we know. We do not know gender, ethnicity, or where this person came from and came to be at that church at this particular point in time. The next morning, which happens to be Sunday, they are discovered still asleep on the pew as the parishioners gather for their weekly service. The family - man, woman, and two children - who are seated on the pew where the person sleeps do the Christian thing and invite the stranger to come home with them. They feed them and offer them a place to stay in their attic room. Through all of this, the stranger never speaks, although it is obvious that they hear and understand. Since they refuse to speak and reveal their name, if they even know it, the family and the town assign a name: Pew.

The seven chapters of this book cover the seven days of the week that lead up to and include the Forgiveness festival which the town holds each year. As time moves relentlessly toward that festival, the reader gains a sense of foreboding and weirdness.  The nature of the festival is menacingly unclear to us. Children's gossip references human sacrifice. A doctor, whom the family takes Pew to see when they are trying to determine sex and health of the individual, tells Pew that people tend to have more heart attacks and accidents in the week before the festival. Also, during the festival, everyone will be blindfolded. This festival begins to sound not very...festive.

In the end, Pew refuses to cooperate with the doctor and will not reveal a gender preference and so their sex, as well as ethnicity and color of skin, remain ambiguous. One of the townsfolk remarks at one point, "I don't know - you seemed darker the other day. It's weird."

"Weird" doesn't even begin to cover it! But it is also great fun as Lacey uses that weirdness to explore and reveal the oddness and hypocrisies that are rampant in this small anonymous town. Even though it is never named, various clues seem to point toward the American South as the location of it. Wherever it is, religion seems the focus of life here, and people are judged by their devoutness. And yet Lacey's narrative of this unique week in the life of this town clearly reveals that the townpeople's devoutness is at best a thin veneer.

Racial division is very much a factor in this town as Pew initially is discovered in a White church and goes to live with a White family, but soon enough that family becomes disenchanted and passes them off to a Black reverend who actually takes Pew to the festival. The book also deals with the hot button issues of questions about trans identity and the way that society chooses to deal with trans individuals.

There are several literary references here, including an epigraph from the works of Ursula K Le Guin and a kind of homage to Eudora Welty. I find it very interesting that Catherine Lacey was born in Tupelo, Mississippi, Welty's and my home state. (In fact, Tupelo is just a few miles from where I grew up.) I think it must be difficult to be a writer from that part of the world and not be influenced by the work of such heavyweights as Welty and Faulkner, to name only two.

This was my first experience with reading Lacey. She is a brilliant writer and she gives us a confusing and messy fable from which we are left to draw our own conclusions. Not unlike life itself.