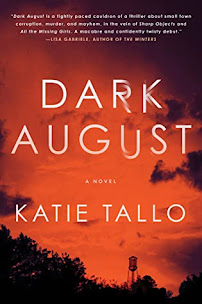 Katie Tallo is an award-winning screenwriter and director who has decided to try her hand at writing a novel, a thriller. Dark August is the result. The August of the title might refer to the month when much of the action takes place or it might refer to the main character. Maybe it is meant to be ambiguous.

That character's name is Augusta but she goes by Gus. She is the twentyish daughter of two police officers both of whom are dead in tragic circumstances. Her father was shot and killed on the job. Then twelve years ago her mother was killed in what was ruled an accident. But was it? That is one of the things that haunts Gus.

Once both her parents were dead, Gus' only living relative was her great-grandmother. The woman took her in but was unable to provide the loving and attentive family that she needed. She ended up sending Gus to a boarding school and insisted that the school keep her on-campus full-time, even during holidays.  This was the way Gus grew up and she escaped as soon as she could and hooked up with the wrong kind of people, including a boyfriend who knocked her around. At a low point in that abusive relationship, she is informed that her great-grandmother has died and has left Gus her house.

Gus doesn't think twice. She takes some money from the boyfriend's wallet while he is sleeping and leaves without a word, heading for the town where her great-grandmother lived. She takes possession of the house and her great-grandmother's ancient dog, but she learns that there is a reverse mortgage on the house and that the bank will own it within three months. She starts making halfhearted efforts to get the house ready for sale and in the basement, she finds an old blue footlocker that she had as a child. In the footlocker, she finds hidden away files that her mother had been collecting before her death. The files contain evidence in a cold case that had obsessed her mother in the months before she died. As Gus looks at what she found, she becomes equally obsessed, both with the case her mother was investigating and the circumstances of her mother's death. She launches her own investigation following where the clues lead her. Then she becomes aware that people that she has interviewed in the course of her investigation seem to be having an unusual number of unfortunate accidents. She seems to have started a wildfire that someone is trying desperately to tamp down.

The narrator here is third party but the point of view is basically that of Gus. I found her character a bit off-putting and hard to warm up to, and there were certain elements of the narrative that seemed extraneous and unnecessary - such as the reappearance of the boyfriend Gus had left behind. What exactly did that random episode accomplish? Nothing that I could determine.

Nevertheless, on the whole, I found this an enjoyable read and once the elements of the story started fitting together, things became a lot clearer and more cohesive. I would recommend it as an engaging summer read that doesn't require a lot of contemplation.