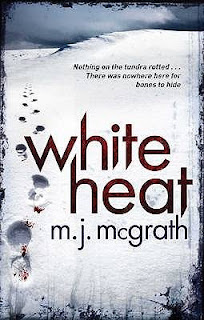 One of the hardest parts of reading this book, which was the July selection of my local Mystery Book Club, was reading the descriptions of the food enjoyed by its half-Inuit heroine. Seal blood soup. Fried blubber. Bloody fish just pulled from the water. Walrus guts. The writer lovingly describes all of this, as well as other aspects of Inuit culture. While I admire the Inuit's ability to survive the harsh environment of the frozen North and I understand that to do so they must use what is available to them, as a wannabe vegetarian who abstains from red meat in the diet, I found the descriptions of the food stomach-turning in the extreme. An Inuit would probably find my fondness for green beans, broccoli and carrots equally stomach-turning.

The second hardest part of reading the book was...reading the book. The writing was just sort of all over the place. The plot meandered along, zigzagging here and there to no real purpose that I could discern. I felt the book could really have used a good, strong editor to cut through some of that turgid, dull writing. The basics of an interesting story were there; they were just scattered and unfocused.

The writer seemed to have a hard time deciding from whose viewpoint she should tell the story. We've got her jumping from Edie, the hunter/guide/part-time teacher to Derek, the policeman/would-be lemming scientist. The two are allies, sort of, but they spend most of the book apart and pulling in opposite directions. Moreover, we do get some character development, or at least exposition, for Edie, but very little for Derek, or, indeed, any of the other characters. They are flat and uninteresting.

The story briefly is this: Edie Kiglatuk is a guide for outsiders coming to her corner of the Arctic, an isolated community on Ellesmere Island. The village elders who rule the community are less than supportive of her because she is a woman. She must supplement her income by being a part-time teacher.

Edie, along with her stepson Joe, is hired to take two men out, allegedly to hunt ducks although they do not really seem interested in hunting. One of the men winds up dead, shot either by accident or on purpose. The village elders, seeking to sweep the whole thing under the rug opt for "accident." Edie isn't so sure.

The survivor of that expedition later returns with another man, a descendant of an explorer of that area of the world. They want to look for the remains of that explorer. They say. Edie and Joe take them out and the party splits in two to search. A blizzard comes. Edie and her man make it back safely to the village, but Joe and his guy don't show up. Finally, Joe does make it back on skies, disoriented and suffering from hypothermia, but he has been separated from the man he was guiding. Later searches for the man or his remains prove fruitless.

Joe is treated at the local clinic and then taken back to Edie's place to recuperate. But sometime that night, he dies. It appears to be a suicide. Again, Edie isn't so sure.

After this event, Edie, the recovering alcoholic, goes off the track and starts drinking again. (Alcoholism and drug addiction seem to be  very big problems in this community.) The story went off the track, too, and I really lost interest, but I forged ahead since my book club meeting was coming up this week.

This was M.J. McGrath's first novel. She is a journalist with extensive experience in writing non-fiction. That experience shows, I think, in this book. It is heavy on information about the Inuit culture and language, but offers little in the way of exploring the inner lives of its characters. It doesn't really make us feel for the characters.

Other than the fact that I felt really bad for Edie having to eat all of that blood soup and walrus guts.