The Handmaid's Tale by Margaret Atwood: A review 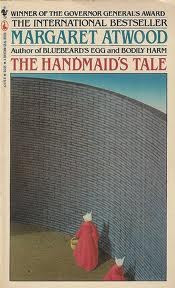 This is another of those books that my daughter has been nagging me for years to read, but I could never quite get in the mood for it. However, now seemed a particularly relevant time to make the book's acquaintance, what with Texas and other states that are controlled by tea party Republicans doing everything in their power to limit or roll back women's rights. I found it to be a powerful, disturbing, and affecting story.

The book was published in 1985 and is a dystopian vision of the near future in a place called Gilead. Gilead used to be known as the United States of America. The president and all the elected representatives in the Senate and House of Representatives were assassinated in order to overthrow the government and set up this new state.

The purpose of this new theocratic and totalitarian state seems to be to return society to an ideal that supposedly existed in the distant past. This "ideal state" is a place where men are completely dominant and women have no rights. They cannot own property. They cannot work outside the home. They are not allowed to read or to write. Their role in life is to produce babies, but this is getting harder and harder to do. The fertility rate is falling and many of the pregnancies that do get started end in miscarriages, stillbirths, or defective children that are referred to as "shredders."

Low fertility seems to be a particular problem among the elite of the society. That's where the handmaids come in.

The handmaids are women who were in second marriages or in a sexual relationship without benefit of marriage and they had proved their fertility by giving birth to a child. In the new theocracy, only first marriages are considered legal and unmarried relationships are totally illicit, so the state dissolves those marriages and removes all the children of these relationships and gives them to an elite childless couple to raise. The women are sent to be trained as handmaids.

The handmaid Offred whose tale this is had had an affair with a married man named Luke. He divorced his first wife and married Offred - whose real name prior to the revolution we never get to know. They had a daughter and lived happily until the theocracy was imposed. They tried to escape to Canada, but they were caught. When we meet her, Offred does not know if her husband and daughter are still alive. She has been "reeducated" to serve as a handmaid and she has been assigned to a man who we know as the Commander. (His name is Frederick. Thus, all the handmaids that become assigned to him are simply called "Of Fred." They have no individual names.)

The Commander has a barren wife named Serena Joy. Offred's duty is that once a month, when she is ovulating, she will lie on Serena Joy's bed with her head propped on Serena's pubic bone as the wife holds her hands. Then she will open her legs to the Commander who will do his duty by trying to impregnate her. It is an entirely loveless and emotionless exercise. And it isn't working.

At length, Serena slyly suggests to Offred that perhaps the Commander is unable to make her pregnant and suggests a liaison with the chauffeur, Nick. Meantime, the Commander has begun instructing Offred to come to his study at night. She is now doing this on a regular basis. In the study, she and the Commander play Scrabble and she is allowed to read!

Even in such a bleak and dark society, Offred finds that human nature has not been repealed. Alliances are formed. She learns that there is an underground movement of resistance called Mayday. She also learns that all those sexual "perversions" that have supposedly been stamped out in the new republic still exist and elite men are free to engage in them.

Punishment of those who are less than elite when they are found to be breaking the rules is too horrible to contemplate, and, inevitably, Offred feels the noose tightening around her and expects to be taken away and disposed of. Surprisingly, Nick comes to her rescue and manages to have her ferried out of the Commander's house, but what happens to her after that? Well, we don't know. Perhaps she escaped, or perhaps she was captured again.

But at least she managed to tell her story on tapes, tapes that were found and transcribed a couple of hundred years later.

There is a postscript to the story in which scholars in the year 2195, long after the fall of Gilead, are studying and analyzing Offred's tale at a symposium. They discuss Gilead in a very dispassionate, objective, and analytical way. They express regret that the ultimate fate of Offred is unknown.

Offred's tale reveals the record of an observant mind that is struggling to make sense of a harsh and dissonant world. She is a straightforward, linear narrator, with occasional lapses for flashbacks to her former life. But her story is told in simple language that somehow makes it even more chilling.

Reading the news today makes Margaret Atwood's futuristic vision of the fall of the United States and its reemergence as a theocratic state seem perhaps not as fanciful as it was in 1985. The Handmaid's Tale is a sobering and scary book, most of all because we know that there are people in this country who would institute this state of Gilead in a heartbeat if they could.

Atwood has said that her book was not meant to be political; nevertheless, in today's political climate, it is difficult to see it as anything other than a cautionary tale. Forewarned is forearmed, and we have been warned.