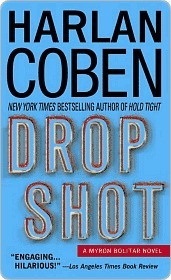 The stench of testosterone emanating from the pages of this book made me want to open a window to get some fresh air while I was reading it. Or maybe go outside and take a walk in the sunshine instead of reading it.

This is the second in Harlan Coben's sports agent/detective Myron Bolitar series. I read the first one for my Mystery Book Club last year and I liked it well enough to give the second one a try. I have two more in this series on my Kindle but I don't think I'll be turning to them anytime soon.

Myron Bolitar is portrayed as the tough but tender agent. He represents young athletes and protects them from the vultures who are just waiting to take advantage of them. He is, of course, irresistible to women and his world is peopled with beautiful women, but the most beautiful and desirable one of all is his and his alone. He plays in some very rough leagues and he's able to defend himself physically, but he doesn't like to carry a gun. That's okay though because he has a wing man looking out for him.

That wing man, Win, is fabulously wealthy and deceptively slight in stature, but he is an implacable killer who is able to snuff out the lives of anyone who is a threat to Myron with ease and then dispose of the bodies where they will never be found. And so he is never exposed, never called to account for any of his kills. His body count in this book, if my math is right, is four.

The focus of the action this time is on tennis. Myron is representing the latest wunderkind who looks like he might win the U.S. Open. He's a young African-American, a street kid with a nebulous background who somehow managed to pick up the skills needed to be not just a tennis pro but a champion.

While he is playing a match at the Open, another former wunderkind, a young woman, is shot to death in another part of the sports complex. The investigation uncovers the fact that she had called the current wunderkind a couple of times in the days before her death. He claims he didn't know her and didn't speak to her.

This young woman, it turns out, was no stranger to murder. Six years before, her boyfriend, the son of a powerful U.S. senator, had been murdered at a swanky tennis club, allegedly by a knife-wielding young African-American intruder. The intruder had a companion, another young African-American man. The police arrived on the scene and one of the intruders was shot and killed. The other one escaped and was never found. So, we have one rich white kid and one poor black kid dead. Surprisingly, the whole thing is almost immediately hushed up. But the young female tennis player had seen the two black kids up close.

It all becomes a tangled web in which no one is telling the truth and when the young woman is killed six years later at the Open, Myron, who was just about to ink a deal to represent her, becomes involved. He is determined to find out what happened, who killed her, and to do so he has to follow the trail all the way back to that earlier murder and solve it, too. Because, you see, the police who investigated both murders are utterly hopeless buffoons. Only Myron and Win have the brains and the balls to solve these crimes.

One passage from the book will sum up Myron's thought processes about the violence which permeates this tale:

Myron had indeed seen plenty of violence, but the sight of blood still made him queasy once the danger passed. He didn't like violence, no matter what he'd told Jessica before. He was good at it, no denying that, but he did not like it. Yes, violence was the closest modern man came to his true primitive self, the closest he came to the intended state of nature, to the Lockean ideal, if you will. And yes, violence was the ultimate test of man, a test of both physical strength and animalistic cunning. Man had - in theory anyway - evolved for a reason. In the final analysis, violence was indeed a rush. But so was skydiving without a parachute.

See? We get both his tender side, i.e. he doesn't like violence and the sight of blood makes him queasy, and his tough, manly side, i.e. "violence was indeed a rush."

But this story is nowhere near that ambivalent. It glories in the violence and wallows in the blood and gore. Excuse me while I go open that window.