The Last Word by Lisa Lutz: A review 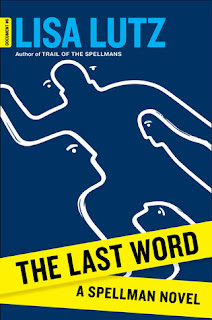 The Last Word, latest in Lisa Lutz's series about a wacky San Francisco family of detectives, is well-named, for Lutz tells us it is literally the last word we will have from Isabel (Izzy) Spellman. She insists that she will not be writing any more of these adventures in Izzy's voice. There may be more Spellman stories but they will likely be told by Izzy's younger sister Rae.

That's probably a good thing because, frankly, Lutz seems a bit bored with Izzy in this one. Maybe she's just run out of ideas for her madcap adventures. Anyway, as Izzy is pushing ever closer to forty, her juvenile attitude toward life begins to seem a bit cloying and inappropriate to say the least.

We meet Izzy again here after she has managed a hostile takeover of the family private investigation business. She has the assistance of her two siblings in this, but her parents know who is to blame. Izzy becomes CEO, CFO, president, and whatever other titles add up to translate as "boss." Immediately, the power goes to her head.

She starts sending out memos with high-handed instructions to her employees and with changes in company policies and procedures. Her employees rebel. Especially her two most important employees, her mother and father. They simply stop working.

The flow of clients slows to a trickle. Little money is coming in and lots is going out. Then, unexpectedly, $10,000 turns up in the company bank account. But what is its source?

After some investigation, Izzy discovers that the money has been embezzled from her most important client, the fabulously wealthy Edward Slayter. Fortunately, he is not only her employer, he is her friend and he trusts that she is not an embezzler. But she must find the true malefactor, and she must do it while the FBI is investigating her.

The family company is on the verge of collapse and bankruptcy. Izzy has managed to piss off the computer guru who usually takes care of their technological problems and now he may be hacking their systems and planting bugs there. Rae has a new business model that she is implementing which may be unethical and maybe even illegal. On top of all that, Henry Stone, Izzy's former boyfriend for whom she still has strong feelings, has a new girlfriend and she is pregnant. They are planning to get married. And then something really awful happens - Izzy's father is diagnosed with leukemia.

Izzy has been able to hold everything together with a very slender thread, but it looks like that thread is about to snap. Things just aren't funny anymore. There's no way she can scheme or charm her way out of this one.

I wouldn't want to mislead you. There are still some very funny bits of the typical Spellman variety in this book, but the story is somewhat darker and more serious than we are used to in this series. Perhaps that is because the Spellmans' creator is getting ready to turn the page and move on in another direction.

She says that there will be a next book in this series and that it will be written in Rae's voice, and all the usual characters will still be there. For those of us who have enjoyed the series thus far, it will be interesting to see just how that changes things.