Nemesis by Jo Nesbo: A review 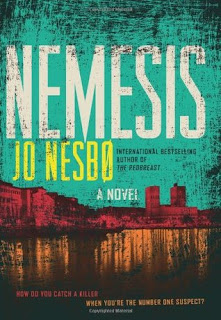 I read a lot of mysteries and so one might think that I would have developed some expertise in picking up clues over the years. But, in fact, I've only recently noticed that nearly all of the fictional detectives that I read about are recovering from or battling some addiction.

Booze, pills, hard drugs, you name it - if it's addictive there must be a fictional detective out there who is suffering from it and that usually also results in dysfunctional personal relationships. Rare indeed is the normal, average, middle-class detective with no dark side and a normal, average, loving family and normal productive relationships. DCI Tom Barnaby of Midsomer Murders is the only one who springs immediately to mind.

I suppose this is a device to humanize the character and make the reader feel more sympathetic toward him or her. And, of course, when it's done well, it does work that way. Millions of fans of Ian Rankin's Inspector Rebus can attest to that. In other instances like the last book I read, White Heat by M.J. McGrath, it didn't really have that effect on me. But Inspector Harry Hole of the Oslo police falls more in the Rebus category.

I met Harry in Jo Nesbo's previous book in this series, The Redbreast. The story in Nemesis is a continuation of some of the unfinished business in that earlier book - namely Harry's investigation into the murder of his partner Ellen. The supposed killer was himself killed by a policeman named Tom Waaler, but Harry's instinct tells him that there was more to the story. That instinct is fed by the fact that Ellen had tried repeatedly to reach him by phone on the night she was killed to tell him that she had discovered something important about the case they were working. Harry is haunted by her enigmatic voice mail messages.

But all of that is in the past and it will have to wait because Oslo has a crisis on its hands.

A man in a black balaclava walks into an Oslo bank and puts a gun to a cashier's head. He tells the young woman to count to twenty-five. When the robber doesn't get his money by the time the woman gets to twenty-five, he shoots her and then escapes with the money without a trace.

Harry Hole is assigned to the case and, in addition to Halvorsen, his usual partner, he is assigned a young woman named Beate whose father was a policeman who was killed in a bank holdup years before.

In time, more bank holdups with the same modus operandi occur but without any more murders. The robbers are highly professional and Harry seeks the help of a professional bank robber in prison in order to catch the perpetrators. (Harry Hole is a believer in unorthodox methods!)

Meanwhile, on the personal front, Harry's girlfriend and her son are in Russia where she is in court, fighting for continued custody of her son whose father is Russian. While they are gone, an old flame named Anna invites Harry to dinner and he goes to her apartment. Harry is on the wagon, but the evening ends with Harry waking up on the stairs outside the apartment with a thundering headache and no memory of what has happened in the past twelve hours. This does not bode well. Sure enough, Anna is found shot to death in her bed in what looks at first like suicide. But is it? Did Harry kill her? He can't remember.

All of the various strands of this plot eventually intersect and intertwine and the dogged persistence of Harry and his team finally achieve results in at least some of the mysteries.

Still unanswered though is the question of who was responsible for Ellen's death. At the end of the book, Harry is beginning to have a glimmer of the truth. We'll have to look to the next installment to see whether that glimmer sheds sufficient light to solve the puzzle.

Jo Nesbo's detective has been a big hit internationally and this particular book was nominated for some of the major mystery genre awards. I don't think he is really as well known in this country as some of the other Scandinavian writers. Henning Mankell, for example. But Harry Hole is an enormously attractive and sympathetic character and I would expect his popularity here to grow as the series continues and more readers discover him and talk him up. I know I'm looking forward to reading the next entry.