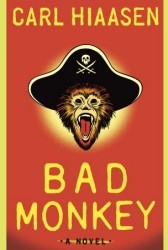 In the tourist haven of the Florida Keys, a middle-aged pair of those tourists rents a charter fishing boat for a day in the Gulf. Instead of catching tarpon or sailfish though, the man hooks the severed left arm of an adult human Caucasian male with a platinum wedding ring on its finger.

When the boat makes it back to port, the third mate who had been instrumental in helping the tourist remove the arm from his hook and, later, in taking pictures of him and his wife with the arm and with the fish that she caught, informs the captain that he has unexpectedly come into some money and doesn't need his job any more. He quits.

A few weeks later, the third mate and his girlfriend are coming out of a Key West eating establishment when the man is shot dead by an assailant.

Could there possibly be a connection between these three events, you say? This is Carl Hiassen, so we know that there is a diabolically ingenious plot at work, and, yes, there must be a connection.

That connection will eventually be exposed by Andrew Yancy, formerly of the Miami Police and now busted from detective in the Monroe County sheriff's office down to a gig as Health Inspector, checking whether restaurants meet standards - a job known in the trade as Roach Patrol. Yancy loved being a detective and longs to have his old job back. He's determined to find a way to impress the sheriff and get him to reinstate him.

Yancy thinks he may have found his opportunity when the sheriff asks him to transport the aforementioned severed arm to the medical examiner's office in Miami.

In Miami, Yancy finds more than he bargained for when he meets the lovely medical examiner, a Cuban-American woman named Rosa. In time they will become lovers, but before that can happen Yancy has to extricate himself from an affair with a hot-blooded former teacher from Oklahoma who turns out to be on the run from a conviction for corrupting a minor. She had an affair with one of her high school students.

The plot gets more and more complicated as we meet the widow of the severed arm, as well as a Bahamian voodoo witch, avaricious real-estate speculators, and many, many more twitchy characters, including that eponymous monkey and his caregiver.

All of this, of course, is just foreplay for Hiassen's main theme which, as always, revolves around the actions of the incredibly greedy and corrupt despoilers of the pristine natural wonderland that once was Florida. This time the degraders of Nature have extended their depredations to the Bahamas as well.

We know that Hiassen will find a way for his villains to get their comeuppance in the most unexpected and mordantly funny way possible, and he does not disappoint. And, yes, one of the instruments in the final denouement is that bad monkey of the title, a monkey that allegedly appeared in the first Pirates of the Caribbean movie with Johnny Depp, but was fired for his very bad behavior. Since the end of his movie career, his bad behavior has, if possible, worsened, but he gets to play a hero in the end.

Carl Hiassen is a very funny writer, but his wickedly humorous tales do have a serious point and that point is his obvious anguish over the despoiling of a state that he passionately loves. Using his wildly unpredictable characters in wildly unpredictable events is his way of exposing some of the unintended but wholly predictable consequences of unbridled greed. We may laugh, but in the end, what we are left with is not a pretty picture.