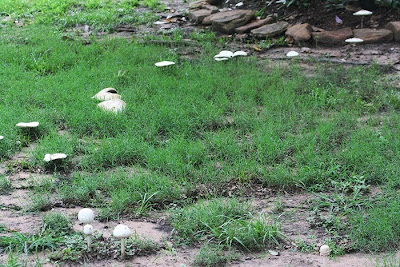 An incomplete fairy ring, or fairy circle. More like a fairy semi-circle.

After several weeks of dry weather, we had rain last week and after the rain, the mushrooms started popping up around the yard. Some of them formed circles, or parts of circles like the large one above that appeared in my front yard in an area of patchy grass.

These naturally occurring rings or arcs of mushrooms are commonly known as fairy rings or fairy circles. You may also sometimes see or hear them referred to as elf rings or pixie rings. Because the mushrooms pop up overnight as if by magic, folk tales have associated them with these magical folk.

In folklore, these phenomena are said to result from the dancing of fairies (or elves or pixies) on moonlit nights. These beings were thought to dance in circles; thus, the mushrooms that became visible in daylight marked the area of their nighttime frolics.

If you are more inclined to a scientific explanation, you'll be interested to know that mushrooms are the fruiting bodies of fungi and that they poke their heads above the soil after rainstorms.

But mushrooms are not individual organisms. They are just the visible part of a huge network of thread-like mycelia, branching filaments of the organism,  that are hidden underground. Mushrooms feed on dead organic matter and the fairy ring manifests itself in a necrotic zone, an area in which grass or other plant life has withered or died, as has happened in the picture you see above.

Not perhaps the best sort of thing to have growing in your front yard. Still, since the rain and the full moon on Monday night, the rings are popping up everywhere. I think the fairies have been celebrating the breaking of the long dry spell. 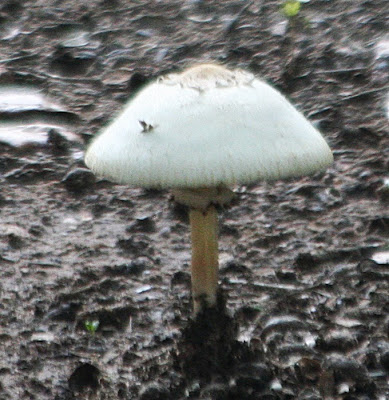 One of the individual mushrooms in the ring.
fairy rings Nature