The Metamorphosis by Franz Kafka: A review 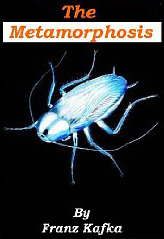 The Metamorphosis is one of those world classics that I have always intended to read but somehow just never got around to. Then the Google Doodle recently reminded me that it was the 130th anniversary of Franz Kafka's birth and I decided that July 2013 was the appropriate time to finally fulfill this particular resolution.

Even someone like myself who had never read the (blessedly short) novella is familiar with the basic story if they are even tangentially educated in the Western literature canon. Traveling salesman Gregor Samsa wakes up one morning in his familiar bedroom in the family home to discover that, overnight, he has turned into a giant insect. What ensues is a senseless and disorienting story of menacing complexity and surreal distortion. In other words, it is the pure definition of Kafkaesque.

Gregor lives in a home with his parents and a sister, and the family employs at least a couple of servants. The most amazing thing about this amazing story for me was the fact that neither Gregor nor the household seem to show much surprise at his transformation. They (even Gregor himself) never seem to wonder why or how this has happened. They never call a doctor to try to find a cure for this unprecedented malady. They just accept it and try to adapt to the situation. They accepted the very unlikely event of a man turning into a giant insect as an unsurprising possibility.

When Gregor wakes up and realizes he is an insect, his first thoughts are about how he is going to get dressed and get to his job! Prior to his transformation, it seems that he was the sole support of the household. His life was his job. He found his self-worth in performing it. In fact, he lived a rather alienated and automated existence which seemed devoid of normal human emotion. In many ways, his life was already insect-like. Thus, his primary concern, post metamorphosis, is to be able to continue that existence. He is horrified at the thought that he might lose his work and his source of income.

His family, it seems, had taken Gregor and his financial support of them all for granted and they are appalled that this support will apparently not continue, but where is their concern for the personhood of Gregor?

At first, the sister shows some sympathy for her unfortunate brother's plight. She brings food to his room and attempts to keep the room clean, but as time goes by and she must begin to work, along with her mother and father, to help sustain the household, her care and concern for her brother begin to flag.

Gregor, meanwhile, continues to try to adapt to his new body. He tries to find the best way to walk, the best place to sit and to sleep, and the best food to devour. He finds that rancid food is the best. Fresh food is disgusting. He tries to talk and communicate but finds that humans can no longer understand him.

The family find themselves in increasingly degraded circumstances as they try to make ends meet. They rent a room to boarders for the extra income. Gregor becomes more and more of a burden to them and their attempts to keep him alive become feebler. Inevitably, so does Gregor and eventually he dies, in essence freeing the family to continue their own insect-like existence.

So, just what is the meaning of this weird tale? It seems a harsh critique of human existence. In Kafka's world, it seems that human lives are essentially meaningless and can be transformed overnight into an automaton-like existence. It's a dark and pessimistic, absurdist view of humanity but perhaps relevant for the way modern human lives have evolved.