What Jonah Knew by Barbara Graham: A review 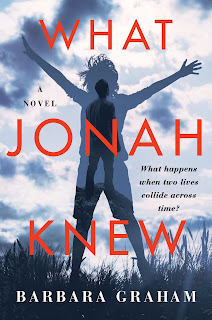 Are rebirth and reincarnation really a thing? That is the issue at the heart of Barbara Graham's debut novel, What Jonah Knew. The Jonah in question is a seven-year-old boy who inexplicably seems to have memories of a twenty-two-year-old musician named Henry who had disappeared without a trace seven years earlier.
Henry had been playing a gig with his band Dog Radio in the small town of Aurora Falls just before his disappearance. And then he became a statistic - one of 650,000 Americans who go missing every year. In the years following his disappearance, Henry's mother Helen had searched without success for answers.
That same year in that same small town, Jonah was conceived by his mother, Lucie. And when Jonah is seven, his parents decide that the family will spend the summer in that town. That's when strange things begin happening. Jonah begins having night terrors and insisting that he has another mom and a dog.
Helen has a dog named Charlie who was actually her son Henry's dog. When Charlie encounters Jonah, there is an instant connection. The dog seems to recognize the boy. Meanwhile, Jonah keeps coming up with these strange observations that he seems to have no basis for knowing about but they are things that Henry would have known about. Spooky, huh?
The theme of the book seems to be the connection between mothers and their sons. There is also a bit of subtext about Lucie's animosity toward her own mother. So, apparently, mothers love their sons unreservedly but are hypercritical of their daughters. As a mother of daughters, obviously, I reject that!
I thought the author did a very good job with character development and exploring those characters' experiences with grief and motherhood - Helen trying to get on with her life after the devastating and still unexplained loss of her son and Lucie trying to help her son deal with some mysterious and inexplicable trauma. This was quite an original idea for a story. I don't recall ever having read anything quite like it. It is told in the style of a psychological thriller and is a creditable first novel effort from this writer. I look forward to reading more of her work.
2022 3-star reads 2022 books Barbara Graham