Things We Do in the Dark by Jennifer Hillier: A review 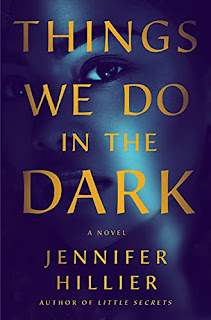 I have not previously read anything by Jennifer Hillier so I went into this not really knowing what to expect, but I was captivated by the story early on. The characters were interesting and I thought the writer did a good job both of introducing them and then of developing them in order to advance the plot. And what is that plot?
The television celebrity husband of a woman named Paris Peralta is found dead in their bathtub. His femoral artery has been sliced and he has bled out in the tub. Paris is beside the tub, covered in blood, and holding a straight razor which is obviously the weapon that was used to cut the victim. She knows how this looks and that she will likely be charged with murder. That is worrisome, of course, but what worries her more is that now her past will be exposed. It is a past that she has worked very hard to keep hidden.
Meanwhile, Ruby Reyes who the media had dubbed "The Ice Queen," had spent twenty-five years in prison after being convicted of a similar murder and she is now unexpectedly going to be released. Ruby knows who Paris really is and she threatens to expose her. The threat to Paris' new life leaves her little choice but to confront the past that she had hoped had been left behind.
This is a fast-paced, well-written thriller that kept me well entertained throughout. At the end, the author gave us an unexpected twist to the story which is always effective in a thriller. She also did an excellent job of developing her characters leading the reader to have empathy for some and to thoroughly dislike others.
The most difficult part of the read for me was the instances of child abuse that Paris experienced. I generally try to steer away from plots featuring child abuse, but this author, I think, handled that part of her story about as well as it could be handled. And to be fair, it was an integral part of Paris' personality development.
Overall, this was not at all a bad book, even if it wasn't exactly my cup of tea. I'm glad that I read it and I'm glad to have made Jennifer Hillier's acquaintance. I'll be on the lookout for future books by her.
2022 3-star reads 2022 books Jennifer Hillier