The Daughter of Doctor Moreau by Silvia Moreno-Garcia: A review 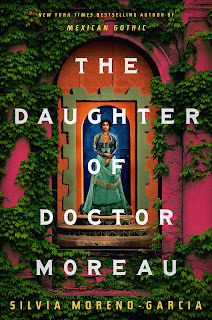 The first thing to grab my attention about this book was that wonderful evocative cover with its hints of mystery and a jungle that threatens to reclaim the structure it depicts. The second thing was the title - The Daughter of Doctor Moreau. It refers, of course, to the H.G. Wells classic The Island of Doctor Moreau. This is, in a sense, a retelling of that famous story from the perspective of the daughter, Carlota Moreau.
Carlota grew up in nineteenth-century Yucatán in Mexico as the only child of the madman/genius. It was a time of conflict and strife but, on the well-hidden, distant estate where they lived, the Moreaus were shielded from the troubles that boiled around them. The estate is actually owned by the Lizalde family who also finance Dr. Moreau's experiments. Moreau is assisted by the estate's overseer, the melancholic Montgomery Laughton.

And what exactly is Moreau's work? Why, it is nothing short of attempting to create a new species, or perhaps several species. His attempts have produced a group of monstrosities, hybrids that are part animal, part human. His creations are dependent upon him for continuing treatment, as is his daughter, Carlota, who suffers from a disease of the blood and must have regular injections just to keep her alive.

The overseer, Montgomery, is an interesting character and central to the action of the story. He has a dark past filled with its own tragedies. He suffers from debts and is in a struggle to overcome his dependence on alcohol. He had felt some apprehension about taking the job with Moreau, but his debts really left him no choice.

The hard-won peace of their life in Yucatán is disrupted with the coming of Eduardo Lizalde, the charming and careless son of Moreau's patron. His presence sets off a chain reaction of events that may make it impossible for the Moreaus and those in their circle to return to the structured world they knew that was perfectly balanced and never-changing.

This story is an almost perfect blend of science fiction and historical fiction. It does contain details of some events in Mexican history, but Silvia Moreno-Garcia skillfully blends her sci-fi details with the real historical events to create a unique kind of narrative that feels real enough to give the reader chills while reminding herself that, yes, it really is fiction. These horrific things didn't really occur. But maybe they could have...
2022 4-star reads 2022 books Silvia Moreno-Garcia