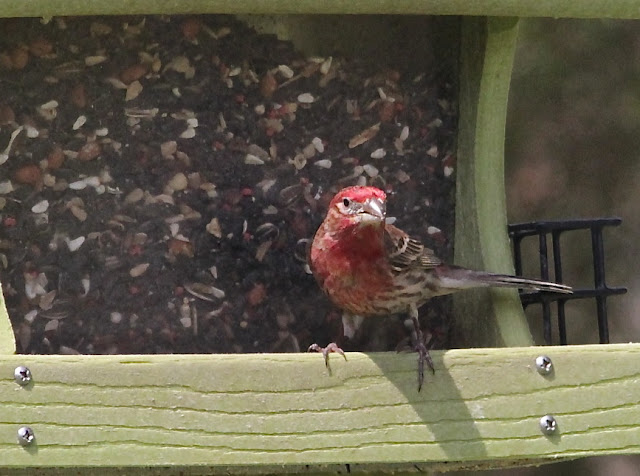 House Finches are regular visitors to my bird feeders.
*~*~*~*
Here's a plea by songwriter Carole King to protect our forests from logging. Simply letting them be costs nothing and has many benefits.
*~*~*~*
The extreme fire season in Australia in 2019 and 2020 sent smoke twenty miles into the air and damaged the ozone layer, causing major warming.
*~*~*~*
As severe drought has all but dried up some rivers in Texas ancient dinosaur footprints have been revealed, footprints dating to more than 100 million years ago. Here are more pictures including a video of the prints.
*~*~*~*
Bird flu has killed at least 700 Black Vultures at the Noah's Ark sanctuary in Georgia.
*~*~*~*
Record-breaking drought has caused some rivers in China, including parts of the Yangtze, to dry up. An unprecedented heat wave in the country has wilted crops, sparked forest fires, and caused major cities to have to dim their lights.
*~*~*~*
The world's smallest sea turtle, the Kemp's ridley, has been found on Louisiana islands for the first time in 75 years.
*~*~*~*
Alaska is burning. As drought has dried out parts of the Alaskan wilderness, it has become more vulnerable to wildfires.
*~*~*~*
Many people harbor an unreasonable fear of spiders but they are an important element in the natural world. And it seems that while some people may have nightmares about spiders, spiders may be having nightmares about us.
*~*~*~* 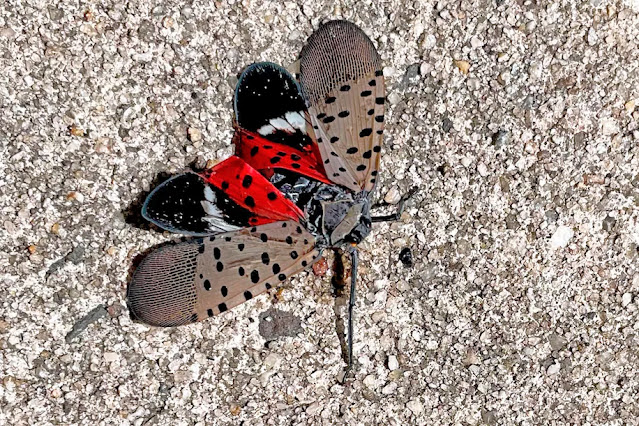 This is a lanternfly, an invasive insect from China that has become established in several states, mostly along the Eastern Seaboard. A campaign is underway to have people smush every one of the insects that they encounter as a way of trying to eradicate them. But there are some who sympathize with the insect that, after all, didn't ask to be brought here.
*~*~*~* 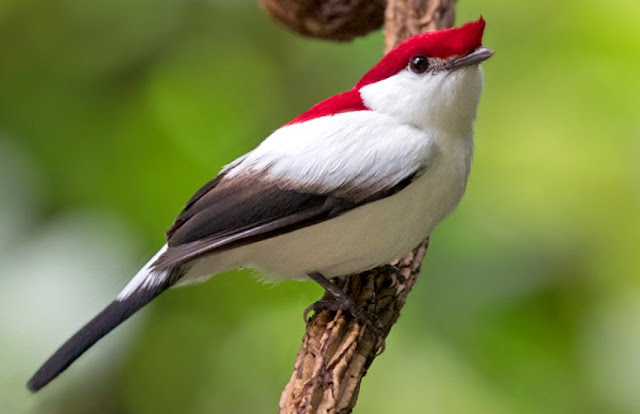 This sprightly little critter is the Araripe Manakin, a critically endangered bird of northeastern Brazil. It is the American Bird Conservancy's Bird of the Week.
*~*~*~*
Macaques are clever monkeys that are skilled in the use of stones as tools. It seems that some of them have found a unique use for stones, wielding them for the purpose of masturbation!
*~*~*~*
Central Mississippi experienced flash floods this week when up to a foot of rain fell in a relatively short period of time. Meanwhile, the Dallas area was being hit by a 1-in-1,000-year flood. But in Houston, we are still dry.
*~*~*~*
How can we protect some of the oldest and largest trees in a world that is quickly heating up? In their hundreds of years of life, California's giant sequoias have faced and overcome many challenges; can they overcome this one?
*~*~*~*
Think you know a lot about Yellowstone National Park? You may not know as much as you think!
*~*~*~*
Here's something else for you to worry about: What if underwater methane deposits break free from the sea floor and release their gas into the atmosphere? Scientists say it could happen.
*~*~*~*
The sea mammal called the dugong has been declared "functionally extinct" in China.
*~*~*~*
As many as one in six of U.S. tree species are threatened with extinction due to an onslaught of invasive insects, a surge in deadly diseases, and the perils of climate change.
*~*~*~*
In the past five weeks, there have been five instances of 1,000-year rain events in the lower 48 states.
*~*~*~*
Climate change is stressing and imperiling North America's bumblebee population.
*~*~*~*
Alaska's snow crabs are disappearing from that environment and their disappearance is likely connected to - you guessed it - climate change.
*~*~*~*
And hundreds of miles south, there is an extreme effort taking place to save the endangered Mexican wolf.
*~*~*~*
Epaulette sharks may be evolving to better survive the climate crisis. They are able to walk on land for up to two hours.
*~*~*~*
Here are five drought-tolerant and highly nutritious plants that could help to feed the world in a hotter climate.
*~*~*~*
The U.S. has set aside 63 national parks. It is one of the best things our nation has ever done.