The House Across the Lake by Riley Sager: A review 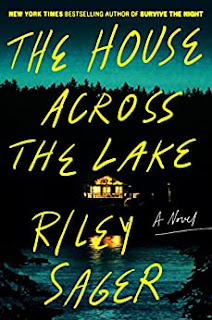 Shades of "Rear Window," the classic Hitchcock movie. In this case, instead of looking into a neighboring apartment, a woman spending time at her family's lake house in Vermont passes her days by watching her neighbors in The House Across the Lake. Her neighbors are Tom and Katherine Royce and Casey Fletcher becomes somewhat obsessed with them. Tom is a tech mogul and Katherine is a gorgeous former model.

Casey has retreated to her lake house to escape the bad press she was recently receiving in New York. She is a successful actress who was widowed when her husband drowned in that very lake. She is attempting to assuage her grief with alcohol. Her viewing of - some might say spying on - her neighbors is fueled by a plentiful supply of liquor.

A fateful change in her relationship with those neighbors comes when Casey saves Katherine from drowning in the lake. It is the beginning of their friendship, but as Casey gets to know her better, she learns that Katherine's marriage to Tom is a fraught affair.

And then Katherine vanishes after telling Casey that her husband would never let her go. He would kill her first. Casey suspects the worst and she is determined to find out what has happened to her friend. But it becomes apparent that there is a serial killer on the loose. Several young girls have been killed. Was Katherine a victim of the same killer? And is that killer Tom?

The basic plot here was interesting, but there was quite a bit of repetitive "padding" to the story that didn't necessarily move the plot along. The book was almost four hundred pages and I felt that if some of that repetition had been cut, it would have been a better read. In spite of those caveats, the book was still a solid three-star read for me.