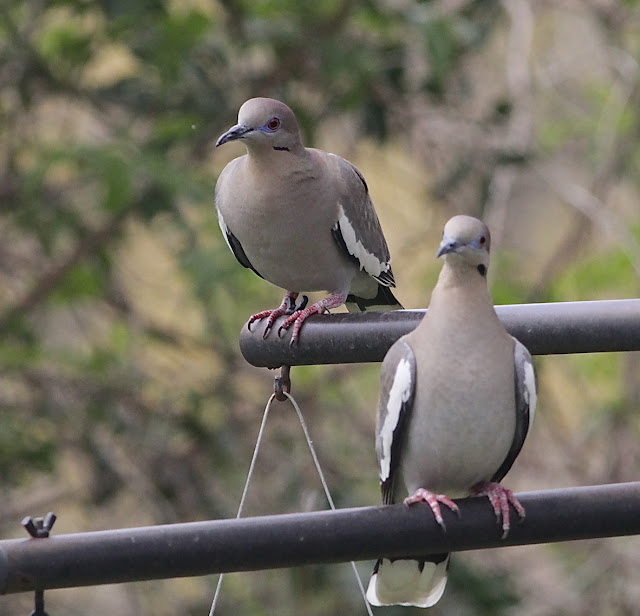 Just about anytime I look out a window, I'll see at least one of these guys in my yard - the ever-present White-winged Dove.

The top environmental news in this country this week has been the dangerous heat wave that has affected much of the continent. It may just be a preview of our future as much of the U.S. will be part of an extreme heat belt by the 2050s. And as extreme heat becomes our norm, gardeners are looking for ways to help their gardens survive and flourish.

Europe also is enduring a scorching summer that is putting a strain on its energy systems.

The president this week signed an energy bill, one aim of which is to reduce dependence on fossil fuels.

Mexico is fighting for its share of the water from the Colorado River, water that largely gets taken by U.S. states as it travels its course. Meanwhile, the U.S. has imposed drastic cuts in water available to the states along the river. 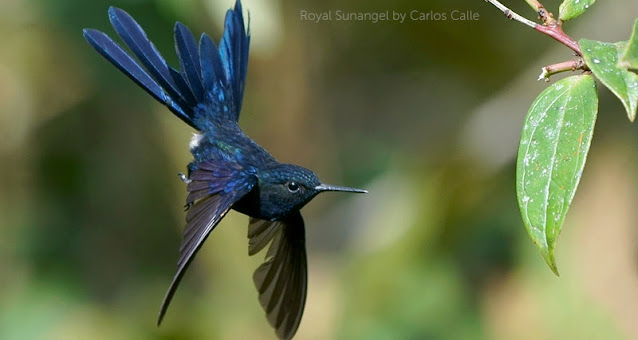 This little beauty is the American Bird Conservancy's Bird of the Week. It is the Royal Sunangel, a bird of northern Peru and southern Ecuador.
*~*~*~*
Donkeys are an invasive feral species that does a lot of damage in Death Valley, but they do serve one important purpose: They help feed the native mountain lions.
*~*~*~*
Meanwhile, mules are doing their part to help preserve Nature in the Bob Marshall Wilderness of Montana.
*~*~*~*
You can participate in tracking Monarch butterflies as they begin their fall migration across the continent.
*~*~*~*
Megaladons, the immense predatory sharks that patrolled the oceans five million years ago, were even more fearsome than had previously been known.
*~*~*~*
Heat waves are not only physically stressful; they can also adversely affect your mental health.
*~*~*~*
Climate change may be hastening the time when California will be faced with a megastorm.
*~*~*~*
The giant kauri trees of New Zealand are dying. Can they be saved?
*~*~*~*
Which are more dangerous to humans - orcas or great white sharks? However dangerous orcas may be, there is one being held captive at the Miami Seaquarium that should be set free.
*~*~*~*
If you followed the exploits of the Leakey family of paleontologists, you may recognize the name Kamoya Kimeu. He was the Kenyan fossil hunter who found most of those fossils for the Leakeys. He died this week at 83 or 84. He was never sure of his age.
*~*~*~*
The wood of the shipwreck of Captain Cook's Endeavour is being eaten away by "termites of the ocean" called gribbles.
*~*~*~*
In another case of an invasive feral being utilized by native species, Australia's crocodiles are devouring invasive pigs that are damaging the ecosystem.
*~*~*~*
New Yorkers are being encouraged to kill another invasive species - the spotted lanternfly that is itself a killer of some crops and plants.
*~*~*~*
A red panda that escaped an Australian zoo has been recaptured after being found hanging out in a fig tree.
*~*~*~*
Two teenagers in the Bay Area have discovered two previously unknown species of scorpions.
*~*~*~*
Harnessing ants as a natural pest control is better for healthy crops than resorting to chemical pesticides.
*~*~*~*
Boreal forests in the far northern latitudes have suffered more tree cover loss due to fire than anywhere else on Earth during the last decade.
*~*~*~*
Here is some information about grosbeaks that live in the West.
*~*~*~*
Being a ranger protecting endangered rhinos in South Africa is a profession fraught with peril. One such ranger paid with his life this week.
*~*~*~*
Hawaiians are working to try to save their historic fish ponds.
*~*~*~*
We know about the Chicxulub asteroid that hit the Gulf of Mexico some 66 million years ago but there was another that hit the planet around the same time off the coast of West Africa.
*~*~*~*
So far, the Gulf of Mexico has been quiet this hurricane season but there is now a tropical system developing that is being watched by meteorologists.
*~*~*~*
One of my favorite memories of my childhood summers is the fireflies that seemed to be everywhere in the early evening dark. But they are struggling in our well-lighted world of today.