The Two-Bear Mambo by Joe R. Lansdale: A review 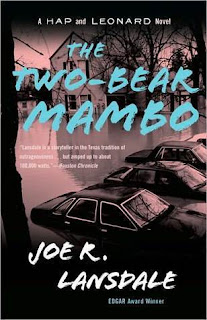 There are twenty-six books in Joe K. Lansdale's Hap and Leonard series dating all the way back to 1990. Two-Bear Mambo is the third book in the series, published in 1995. I've not read any of the others and just decided on a whim to read this one. The series is set in the fictional town of LaBorde in East Texas, an area I'm somewhat familiar with.

Hap and Leonard are described as amateur investigators and adventurers. Hap Collins is a White working-class laborer who spent time in federal prison back in the day when he refused to be drafted into the military during the Vietnam War. He believes in non-violence and does his best to avoid conflict. Leonard Pine is a gay, Black Vietnam vet with some serious anger issues. He has no tolerance for racist and/or gay slurs. He is quick to anger and doesn't really understand Hap's more passive approach to life. These two opposites are the best of friends.

In this entry, Hap's ex-girlfriend Florida Grange, who is also Leonard's lawyer, had set out to try to recover some long-lost tapes of a deceased blues musician. Unfortunately, the tapes are thought to be in the Klan-infested town of Grovetown in East Texas and the ex-girlfriend has now apparently disappeared there. There is reason to fear for her safety because she is a Black woman who was asking inconvenient questions in a racist town.

She had been investigating the jailhouse death of a legendary bluesman's son who is believed to have been in possession of those missing tapes. He had supposedly committed suicide while in jail but there may be reason to question the official explanation.

The relationship between Hap and Leonard is an interesting and complex one and Lansdale describes it believably. Moreover, his descriptions of the East Texas landscape and zeitgeist rang true for me. As one who traveled those roads for many years as a state employee, I could clearly recognize both the people and countryside which they inhabit. In reading about the author, I was interested to see that he himself lives in Nacogdoches in the same county where I lived for many years, so I think he came by his knowledge of the area quite honestly.