The Paris Apartment by Lucy Foley: A review 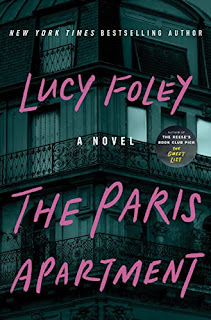 The apartment in the title is the home of Ben Daniels, a British journalist. Ben receives a text from his half-sister Jess Hadley asking if she can stay with him for a while. Jess, who lives in Brighton, has recently lost her job and is now homeless and virtually penniless. She and Ben don't know each other well. They lost their parents when they were quite young and their paths diverged. Ben was adopted by a wealthy family who gave him all the advantages of that wealth. Jess was long shunted around in foster care and never really had a place she could call home. But when she contacts Ben asking for help, he invites her to come stay with him. When she arrives in Paris with all her worldly goods and makes it to Ben's apartment, there is no Ben there. No note, nothing to explain his absence, and his neighbors are, to put it mildly, not helpful.

The apartment is quite palatial and Jess doesn't understand how her brother could have afforded it on a journalist's salary, but then she learns that he got the apartment through Nick Miller, a friend of his from Cambridge, who has an apartment in the same building. Nick seems like a nice guy but claims not to know where Ben is; however, he offers to help Jess find him. The other residents of the building seem unaccountably hostile to her.

Jess begins asking questions about her brother and about his life and getting very few answers. As determined as she is, she is facing a web of secrets and intrigue where it seems that everyone she meets is wearing a mask of some kind. The question is why. What have they got to hide and what do they know about the unexplained absence of Ben? There doesn't seem to be anyone Jess can trust, maybe not even Nick.

Jess has had a hard-knock life but she is a survivor and she is undeterred by the air of menace that seems thick enough to be cut with a knife. Her character was really the strongest part of this narrative. The narrative itself is presented to the reader through the viewpoints of several different characters, all residents of the apartment building. The differing voices of the characters lent even more mystery to the action. They are essentially all unreliable narrators and the reader quickly learns to take each of them not just with a grain but with a large block of salt.

I found the book suspenseful up to a point, but more than halfway through the action really began to drag for me. It seemed that it was going nowhere and I began to find Jess more than a little irritating. Moreover, the plot began to feel a bit claustrophobic as virtually all the action was in that apartment building. As far as it being a Paris apartment, it might as well have been in Podunk because we really didn't see much of Paris.

Two years ago, I read Lucy Foley's book The Guest List and liked it quite a lot. For that reason, I was excited to be able to read this book, so I was disappointed that I didn't like it nearly as well. The plot felt contrived and the action really began to feel forced and ponderous after a while. It wasn't a bad book; it just wasn't nearly as good as I was hoping for.