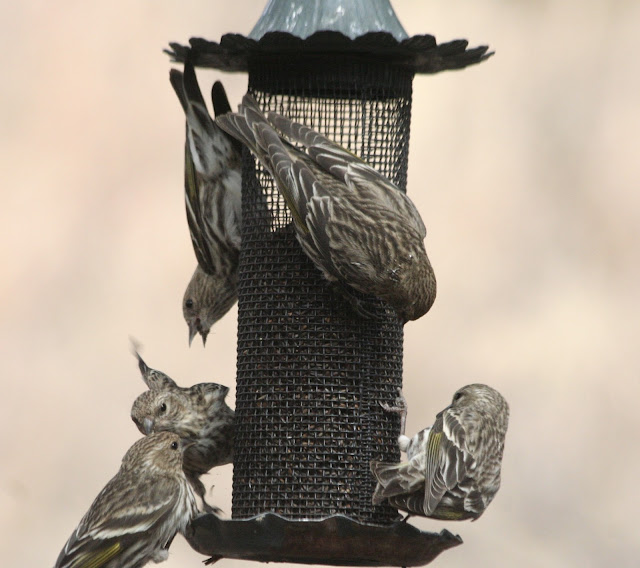 Most winters our bird feeders are constantly covered in these hungry little birds. They are Pine Siskins, noisy, active, argumentative, and always fun to watch. This winter I have not seen a single one. Where are they? I have missed them.
*~*~*~*
As Russia has pressed its invasion of Ukraine, the main concern has been the fate of the humans caught in its path. But what about Ukraine's environment? War inevitably brings environmental destruction and this one is no exception.
*~*~*~*
In all the squawking about high gas prices, conservatives have been quick to point the finger at the country's conservation policies, implying that we would be energy self-sufficient if we just "Drill, baby, drill!" But this report says we can't drill our way out of the problem.
*~*~*~*
The Pacific Flyway of migrating birds is in serious danger of collapse because of the water crisis in the Klamath Basin, one of the continent's most important wetlands.
*~*~*~*
Gray wolves are making a comeback in California, but, predictably, not everyone is thrilled about that.
*~*~*~*
The Smiley-Woodfin Native Prairie Grassland is the largest remaining section of tall-grass prairie in Texas. It is considered a living museum, but its continued existence is threatened by plans to install solar panels there.
*~*~*~*
An ice age painting on a rock in Colombia depicts giant sloths and other animals now extinct in the Americas.
*~*~*~*
Scientists say that the Amazon rainforest is near the "tipping point" from which it would be impossible to recover. This would have dire implications for the planet.
*~*~*~*
Long ago, FDR had called for the establishment of an international park with Mexico that would encompass a great transboundary conservation area spanning the Rio Grande. That dream is still alive and maybe its time has come.
*~*~*~*
Redlining which allowed for federal discrimination in housing based on race was outlawed more than half a century ago, but it still has a negative impact on people's lives.
*~*~*~*
The endangered Hill's horseshoe bat that was feared to be extinct has been found still clinging to life in a dense Rwanda forest to the delight of conservationists.
*~*~*~*
Birds possess a magic that is even able to capture the imagination of teenage boys.
*~*~*~*
Salmon are suing the city of Seattle. More accurately, the Sauk-Suiattle Indian Tribe is suing in the name of the salmon as part of the "rights of Nature" movement. They hope to force the removal of three dams that impede the salmon's ability to spawn.
*~*~*~*
The state wildlife resources commission in North Carolina has voted to allow bear hunting in three bear sanctuaries, provoking an outcry from local residents and animal rights groups. The commission's justification of the action is that there have been "increased human-bear interactions."
*~*~*~*
You'll never hear the call of an Ivory-billed Woodpecker in the wild but thanks to recordings, you can listen to the voice of the woodpecker and many other extinct birds.
*~*~*~*
The EPA plans to allow the use of toxic pesticides that paralyze bees, butterflies, and other insects in spite of moves by the European Union to ban the use of the toxins that have been blamed for a serious decline in insect populations.
*~*~*~*
The last intact forest in Tallahassee, Florida is threatened with destruction as the private owners of the forest want to cut it down and build a housing development.
*~*~*~*
The White Ibis is the iconic bird of Florida's Everglades, but it is moving to the suburbs in search of food handouts from humans.
*~*~*~*
Scientists say there are five common personality traits in animals and that they are important to study in understanding the roles that the animals play in their particular ecosystems.
*~*~*~*
It's easy to feel helpless and overwhelmed when faced with a problem as big as climate change but here are six steps that one can take in one's life that will help to reduce the carbon emissions driving the change.
*~*~*~*

The American Bird Conservancy's Bird of the Week is the Red Phalarope, female pictured here. It is a shorebird that nests on coastal tundra and winters at sea.
*~*~*~*
Even with all the terrible problems in the world, it is still possible to find joy in the imminent arrival of spring and the new beginnings that it promises.
weekly roundup