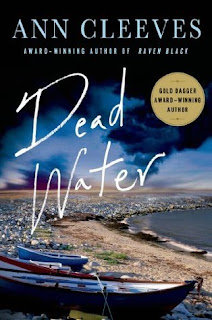 Continuing with my reading of Ann Cleeves' Shetland series, this is the fifth entry. Those who have read the series or have at least read the fourth book will remember that Inspector Jimmy Perez suffered a personal tragedy in that one. The action of this book takes place just a few months later and Perez is still in deep mourning and on leave from his job. It could be read as a standalone, as Cleeves provides enough background information so that such a reader would not be lost.
The Procurator Fiscal (prosecutor) Rhona Laing, a resident of Shetland, discovers a body on the boat that she regularly takes out. The murdered man is Jerry Markham, a former resident of Shetland who had recently returned for a visit and to investigate a story he was considering writing about. Markham was a journalist who was apparently looking into an island group that is promoting green energy through ocean tides. There seems to be some controversy around the issue with some groups supporting and some opposing it and emotions do run hot on the island, especially when money is involved.
Detective Inspector Willow Reeves is assigned to investigate the crime and she initially works with the sergeant, Sandy Wilson, in Inspector Perez's absence. Reeves intuits almost immediately that Rhona Laing is withholding information and she suspects that she may have had something to do with the murder, but Wilson defends Laing and is quite sure that she couldn't be involved. But we know that she's not telling everything she knows.
The murder victim, it turns out, may have had plenty of enemies on the island. Years earlier he had run out on his pregnant girlfriend there. That, needless to say, did not go down well with her family and they have long memories. The girlfriend, after a miscarriage, got on with her life and now seems settled and happy. But resentments against the man who wronged her linger. To complicate things even further, soon another murder occurs and the police have their hands full investigating.
And soon Jimmy Perez is drawn into the investigation to provide local information to the investigator. His understanding of the locals and their interrelationships is key to solving the crimes. At the same time, we get a view of Perez's personal life as he tries to adjust to his new situation and his role of caretaker to a small child, a precocious and sweet little girl, the daughter of his former friend, Duncan Hunter, who is much too busy to take responsibility for his child.
The murder investigations proceed in a logical manner and there are plenty of clues as well as red herrings along the way. And we know that, in the end, it will be Jimmy Perez who comes up with the solution, even if he is not officially involved.
As in all her books, Cleeves describes her characters so well that we feel as if they are standing in front of us. This includes the detectives as well as all the suspects involved. In this one, particularly, we get a real feel for the relationships between the detectives as they work. And her descriptions of the physical aspects of the island and its culture provide a vivid setting for the action. My only real complaint about the book is that it seemed to go on too long. The solution, the ending, was a bit drawn out. Those are fairly minor quibbles. This was another strong entry in an interesting series.
My rating: 4 of 5 stars
2022 4-star reads 2022 books Ann Cleeves