Anthem by Noah Hawley: A review 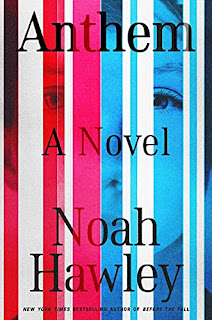 This is either a polemic about the unsettled nature of modern society or it is a book about a ragtag bunch of teenagers out to save the world. Maybe it is both. Frankly, it is really hard for me to say just what it is. The main story is fiction and yet the author keeps interrupting himself with personal observations, explanations, and apologies. He can't seem to just let his fiction speak for itself. In one of his personal interjections, he writes: "First of all, your author would like to apologize for the world he has created. He knows it is ridiculous. The fact that the world he lives in is also ridiculous is no excuse. The author's job is to make sense of the senseless." Well, yes, that is sort of the writer's job description and in this instance, Hawley has failed miserably.
The chief failure from my perspective is that the book has too many characters and we never really get to know any of them. It was extremely hard to keep them all straight and, after a while, I didn't even try. Also, the narrative jumps around, starting in 2009 as we see 9-year-old Story Burr-Nadir singing the national anthem during a school recital in Brooklyn. But then it leaps ahead by several years to a time that is after the Covid pandemic when the latest fad among teenagers seems to be committing suicide. Suicide becomes performance art. Hawley writes that it is as if the species were giving up on itself.
The only ones of those multitudinous characters that we even halfway get to know are Simon Oliver and Louise Conklin. Simon is the son of the chief executive of Rise Pharmaceuticals and he has an older sister named Claire. One day young Simon discovers the body of his 17-year-old sister who has committed suicide in their parents' bathroom by ingesting an overdose of the pills that her father's conglomerate sells. Before she died, she wallpapered the room with "small foil packets of oxycodone." It's hardly surprising that walking in on such a scene served to cause Simon to become somewhat unhinged.
The parents' response to Simon's traumatic experience was to send him to a psychiatric facility for children of the fabulously wealthy, a place called Float Anxiety Abatement Center. There he meets Louise and a boy who is called Prophet, plus a bunch of other traumatized teenagers of wealthy parents, but, again, at this point, I was having a really hard time keeping all these people straight.
It was just about at this point that the story really began to go off the rails for me. We've got multiple plotlines shooting off in different directions. There's Story Burr-Nadir, now 22 years old, who has gone missing. Meantime, her mother, Margot Nadir, is being considered for the position of justice on the Supreme Court. There is a character called E.L. Mobley, aka the Wizard, who is another of those fabulously wealthy people. He is a sex addict and his hobby is kidnapping adolescent girls and impregnating them. He has an employee called the Troll who finds and captures the girls for him. One of the victims is a girl called Katie, aka Bathsheba DeWitt, who the Prophet is obsessed with setting free from the Wizard's compound in West Texas. (Of course, it would be in West Texas!)
The gang of teenagers from the Float Center escapes their confines and sets out to save themselves and, incidentally, the world. Catastrophes pile on top of each other and the pace of the novel's action becomes quite herky-jerky and scattered. Chaos ensues and the outcome is left ambiguous for the reader to decide.
In 2016, I read Noah Hawley's previous book, Before the Fall, and I loved it. It was easily a five-star read for me, so I went into this one with very high hopes and expectations. Sadly, those hopes and expectations were not to be realized.
My rating: 1 of 5 stars
2022 1-star reads 2022 books Noah Hawley